[ The Korea Herald – Send E-mail ]
‘Shining symbol’ of alliance
Yongsan garrison commander stresses role as a bridge between Korean, U.S. soldiers
By Korea Herald
Published : Sep 11, 2013 - 21:16
Updated : Sep 11, 2013 - 21:16
The KATUSA program is a “shining symbol” of the Korea-U.S. alliance and plays a crucial role as a bridge between the two militaries, said the commander of the U.S. Army garrison in Yongsan, Seoul.

Since taking office a year ago, Col. Michael E. Masley has prioritized the swift integration of the young Korean soldiers into the U.S. military so that they can serve to maintain the alliance and readiness for peninsular defense.

“The KATUSAs stand as a shining symbol of the alliance and they have for the last 60 years,” he told The Korea Herald.

“My understanding is that it is the only program in the world that a government gives its most precious resource ― that being its sons. We work to integrate them in the barracks, in the training and in our culture together for the common defense of the ROK (Republic of Korea),” he said. 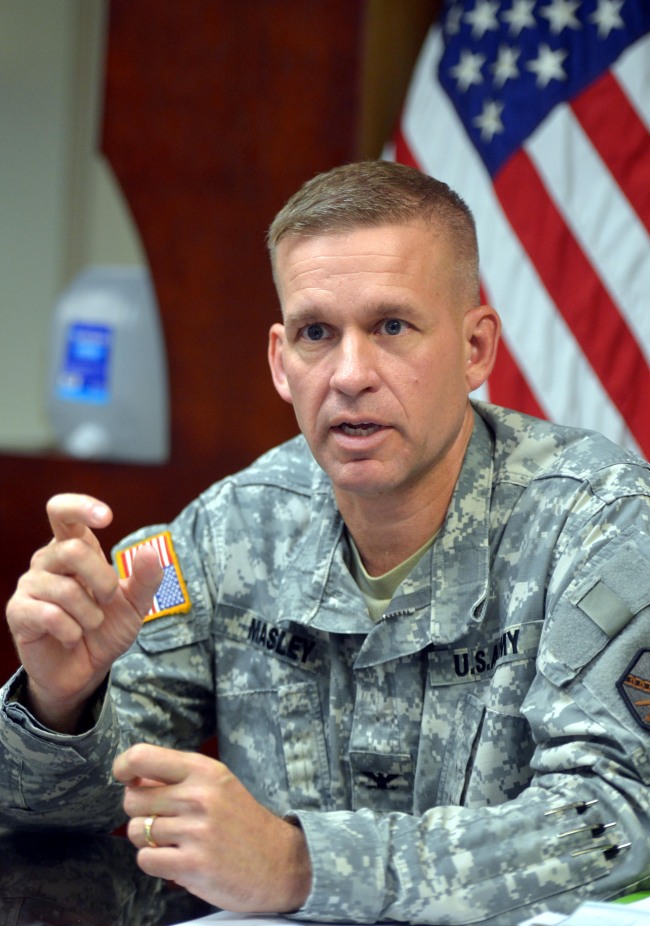 Col. Michael E. Masley, commander of the U.S. Army Garrison-Yongsan
The commander, who served in Afghanistan for a year before coming here, also appreciated their role in helping new U.S. staff quickly adapt to Korea.

“They are invaluable to helping integrate U.S. soldiers in the units also,” he said. “Part of that is how KATUSAs can assist soldiers in understanding Korean culture and the Korean way of life, and helping strengthen the alliance.”

Like any other organizations consisting of people from different cultures, there have been some conflicts, at times, between KATUSAs and U.S. staff. But based on mutual trust and the shared goal of defending against any aggression, they have quickly resolved them, Masley said.

“We got KATUSAs living, working and getting ready to fight tonight side by side with U.S. soldiers. They understand they are here to defend democracy, defend the ROK, and it is one team,” he said.

“They will, in fact, go together. In doing that, they very quickly overcome any cultural or language barriers.”

To further improve the KATUSA program, Masley said he would continue to educate U.S. soldiers on the importance of the program.

“I wish that I could thank the leadership that started the KATUSA program in the 1950s because it has served the test of time ― KATUSAs continue to serve today,” he said.

“(We appreciate) what they do for the alliance, for the Korean economy (after their discharge) and Korean government. So I would go back and thank the folks that initiated the program.”