Film director Kim-Jho Gwang-soo and film distributor Kim Seung-hwan held a symbolic wedding in central Seoul. They have been partners for nine years.

The two men made their vows in front of guests reported to number about 1,000, including Kim-Jho’s mother, movie director Byun Young-joo and civil activist Paik Ki-wan.

Their marriage, however, will not be formally recognized here, as Korea has not legalized same-sex marriage. 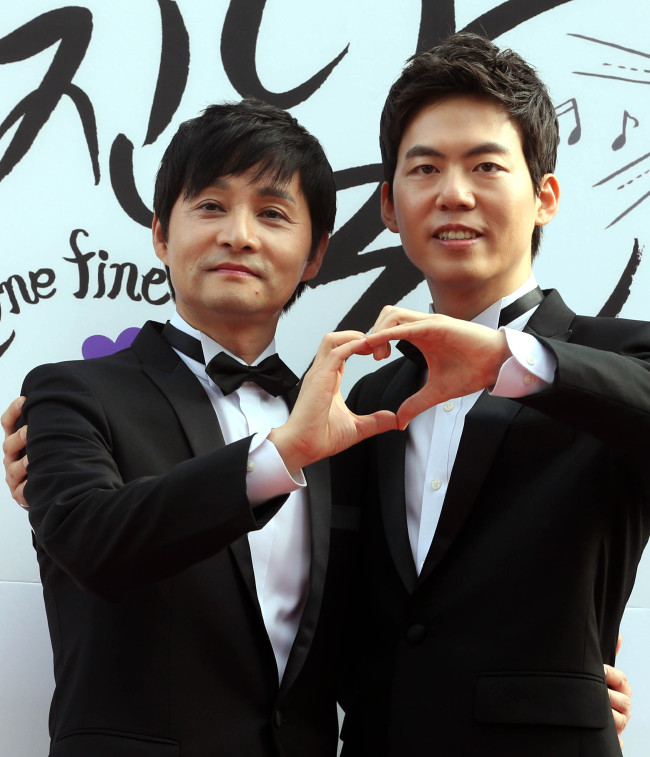 Film director Kim-Jho Gwang-soo (left) and his partner Kim Seung-hwan pose for photo before their wedding ceremony held in Seoul, Saturday. (Yonhap News)
But Kim-Jho, 48, an openly gay activist, and his 29-year-old partner announced that they are now a married couple regardless of the law.

“It is important whether or not we become a legally bound couple. But more importantly, we want to let people know that gays can marry too in our society,” Kim-Jho told reporters before the ceremony.

The newlyweds will seek legal approval for their marriage. They said they would consider filing a petition with the Constitutional Court if the government refuses to legally recognize their marriage.

Gay rights activists and some lawmakers have backed their decision, vowing to join the legal fight.

Rep. Jin Sun-mee of the Democratic Party, who attended the ceremony, said the couple represented the true meaning of love.

“People in love should be encouraged to be together. Not allowing people to marry because of their sex is discrimination,” Rep. Jin said, noting the ban on same-sex marriage infringes on the basic rights of citizens.

Their wedding has provoked strong responses from church groups and conservative activists.

Saturday’s ceremony was disrupted briefly when an old man, who claimed to be an elder in a Christian church, rushed onto the stage and threw food and waste at guests.

“Gay marriage is a sin. It destroys society and families,” he shouted before being dragged away by police.

Church groups here have strongly opposed gay marriage, claiming that it would destroy the essential building block of society and traditional values.

France recently became the 14th country to legalize gay marriage after New Zealand and the Netherlands, but public opinion was divided over the move, which aroused stronger-than-expected opposition.