New cast member You Hee-yeol, famously known for lyrical, sensual and trendy ballad music under the project group, “TOY,” showed off his mischievous side in the program’s “Weekend Update” slot.

“I would like to leave a video message to Suzy (from girl group Miss A): This is my first on the show and I am so nervous. ... By the way, what are you wearing right now?” garnering giggles from the audience. 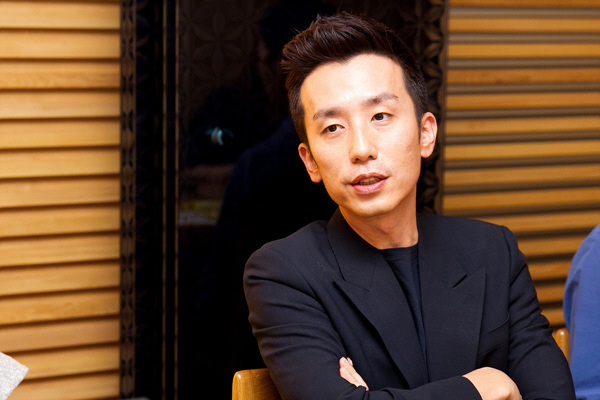 Musician You Hee-yeol speaks to the press about his debut on SNL Korea at CJ E&M Center in Seoul on Friday. (CJ E&M)
He then hugged and pawed fellow cast member Shin Dong-yeop, who is also notorious for sexual, mischievous humor.

You, a popular radio DJ, is known for sophisticated and intelligent music choices, but at the same time his risqu humor, earning him the title of “emotional pervert.” Indeed, he seemed to be a perfect fit for the satirical show that mainly deals with politics and sex.

“I have a principle when making R-rated jests. It is to not offend women. If they don’t find my comments skanky, they may be acceptable to the rest of the viewers,” the Seoul National University graduate said at a press conference held on Friday, a day prior to the live show.

“I always put women listeners in front of me as the barometer. I want sexual comments to be a lubricant among people, not to offend or attack another. So, I choose to make a fool of myself. I become the pervert instead of making everyone else (perverts),” he said.

“The fundamental of humor is self-deprecation and that comes from self-confidence. In other words, those who make fun of themselves can be healthier than others,” he said.

Criticism has been emerging that the show has recently been sacrificing political satire for sexual humor. There have been rumors that political and administrative bigwigs have expressed discomfort at becoming the target of mockery.

You and Ahn Sang-hui, chief producer of the show, both admitted to the difficulties.

“The main condition of parody and satire to become a part of comedy is to not have taboos. It should have a blow-away effect to the viewers and those who are the targets of the jokes,” You said.

“We should make careful and incremental efforts to find that spot.”

“We are still at the point where we are trying to embrace people who are not interested in politics. We are trying to meet somewhere in the middle,” Ahn said.