Scholars from Korea, the U.S. and Japan also urged academia to launch comprehensive, transdisciplinary studies into the world’s oldest wooden canons, consisting of some 1,514 texts carved on 81,258 individual blocks and bundled into 6,815 fascicles at the 2013 Tripitaka Koreana Festival, International Symposium held at the Plaza Hotel in downtown Seoul on Tuesday.

Professor Robert Buswell of UCLA asserted that the UNESCO Memory of the World register is the most comprehensive collection of East Asian Buddhist literature compiled up to that time. He suggested that the English name of the cultural heritage be changed to simply “Goryeo Daejanggyeong” in Korean, or Korean Buddhist Canon, instead of using the term Tripitaka. 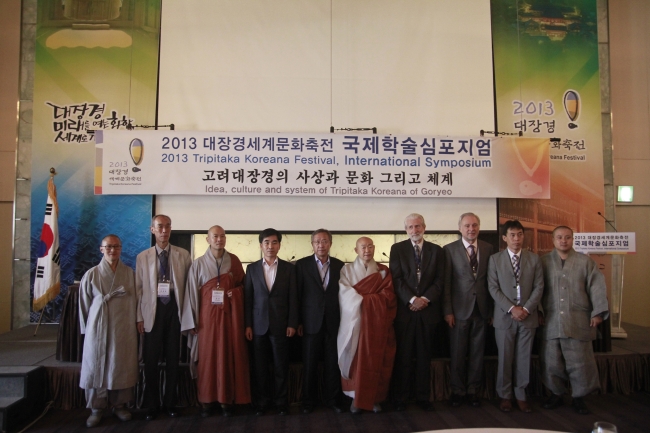 Ven. Seonhae (fifth from right), chief of Haeinsa Temple, and other high-ranking officials in Korean Buddhism pose with speakers at the 2013 Tripitaka Koreana Festival, International Symposium in Seoul on Tuesday. Speakers included, from fourth from right, Lewis Lancaster, Robert Buswell and Baba Hisayuki, as well as Choy Young-ho (second from left). (Tripitaka Koreana Festival organizing committee)
“The ‘Goryeo Daejanggyeong’ is much bigger and larger than the Indian model of Tripitaka. It doesn’t really give a sense of what the Goryeo Canon is,” he said, explaining the production of the set of wooden blocks as an enormous national commitment of money and manpower ― perhaps, he claimed, the closest modern comparison being the U.S. missions to the Moon in the 1960s.

The international symposium highlighted lesser-known aspects of the Buddhist canon, encouraging the public to raise their awareness of the 800-year-old cultural heritage item.

Buswell introduced monk-scholar Sugi, who left a work documenting in remarkable detail the process that he and his editorial team followed in compiling his canon.

“Sugi’s notes are even more valuable because they are the only extant record detailing how an East Asian Buddhist scholar in the premodern era went about the task of collating and editing multiple recensions of thousands of scriptures into a definitive canon,” he said.

Professor Baba Hisayuki of Bukkyo University in Japan revealed that the Tripitaka Korea, believed to have been completed at a plant in Namhae, South Gyeongsang Province, around 1247 after 18 years of hard work, was one of the most desired items among Japanese Buddhists in the Edo era (1603-1867) Japan.

“According to the Annals of Joseon Kingdom, 45 complete printings of the Tripitaka Koreana were sent to Japan and the Ashikaga clan, which ruled Japan’s then capital Kyoto. They received 20 sets from Joseon and the Oouchi clan received 12 sets because they wanted to establish Buddhist temples in their domains, and having the Tripitaka was essential,” he said.

He also said that a wide range of academic research into Buddhism was conducted at the same time and the Tripitaka was used as one of the most valuable materials for it.

Lewis Lancaster, professor emeritus at UC Berkeley, called for international and transdisciplinary action for studies into the canons.

“The focus of these studies would be to preserve, use and understand these valuable resources and in order to achieve these objectives, research strategies directed toward the thousands of objects in the collection cannot be limited to a single discipline or even a few,” said Lancaster, who is credited with introducing the Tripitaka to the Western hemisphere.

“The range of expertise must include philosophy, social networks, botany, physics, architecture, archaeology, history, political science, art, linguists and more. In order to accomplish such future collaboration, new strategies and organizations are required. It will require nothing less than a major transformation of scholarly culture, especially in the humanities as we shift from individual to team-oriented research.”