“We understand SDI and Tesla are undergoing last-minute tests before the Korean company starts to supply its batteries,” said a source close to the matter.

Final steps before the contract is inked include testing the battery life, which will be conducted by Samsung SDI, coupled with driving and safety tests, which are to be carried out jointly by SDI and Tesla.

The Tesla model that SDI will supply has yet to be specified, but sources said it was likely to be the Model S, which is selling strong, and possibly the Model X, which is to be produced starting next year. 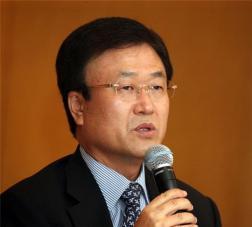 Samsung SDI CEO Park Sang-jin
Reports since last month have said that Samsung SDI, a world-leading electric car battery maker, would be offering the cells to the U.S. electric car enterprise run by billionaire Elon Musk. SDI, which has invested in electric car batteries since 2008, has successfully developed and is supplying the world’s largest capacity of 60 Ah to BMW’s i3 and Chrysler’s Fiat 500e. SDI also has a contract with Volkswagen.

The Korean company, however, will not be the only one supplying, as sources believe Japan’s Panasonic and China’s BYD are among the other suppliers.

The diversification of resources was triggered by Tesla’s fears of a supply disruption, as its current partnership is solely with Panasonic of Japan. Citing the 2011 Fukushima earthquake, the carmaker has publicly said such disasters “may hurt” the company.

The growing technological edge of battery makers outside of Japan was another reason Tesla had decided to look into partnerships with other suppliers, sources said.

Panasonic became the first to successfully mass-produce high-capacity batteries in 2006 and is cited as having the most sophisticated and concentrated battery-making technology, but Korean makers are rapidly catching up.

Capacity is particularly a vital issue for Tesla since its lineup is mostly sports cars, which require a higher capacity than most conventional electric cars. Tesla’s battery pack, for instance, reportedly weighs up to 900 kilograms, which is about half the weight of the entire vehicle.

China-based BYD was another natural choice for Tesla, as it stands as the largest supplier of rechargeable batteries in the world and is also capable of building its own electric vehicles.

Back in Korea, LG Chem was also reportedly in the race against Samsung.

“Tesla is sought after by Korean battery makers because of the sensation it is causing in the market, and because of the potential it holds,” said another industrial source who declined to be identified.

He added that Samsung SDI has been eyeing Tesla for a while now, and considers it to be “something much bigger than just a start-up.”

But an SDI official denied the report on the contract plan, saying at present there was nothing to say on the issue.