The 7-inch screen device lets users access some 50 TV channels, movies, millions of music tracks and tens of thousands of e-books. Some 1,600 children’s stories and 32 different musical instrument applications are also available. Monthly subscription fees vary from 16,000 won to 20,000 won based on services. 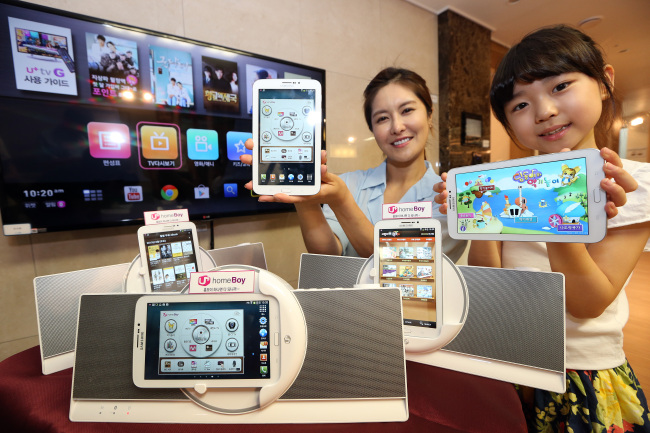 Models promote LG Uplus’ smart device Homeboy at a launch in Seoul on Thursday. (Yonhap News)
On top of the entertainment functions, the device can serve as a home CCTV. When users are out, a camera attached to Homeboy allows them to observe the inside of their home from their smartphone. The device automatically records the images if someone breaks into the home, and notifies the owners via text message. Users can answer the phone without pressing the button, and operate diverse functions with voice recognition.

This gadget can also be used as a navigation system, providing three-dimensional maps and real-time traffic information to smartphones.

“The launch of Homeboy enabled us to take the first step in opening the smart-home era in which all home appliances can run on one device,” said LG Uplus executive Kang Hyun-ku during a press conference.

LG Uplus plans to unveil a total home-solution product which enables users away from their house to control home appliances such as lighting and electricity by linking to their processors.