Since being forged six decades ago, the Korea-U.S. alliance has undergone major shifts in line with Washington’s global strategies to cope with changing security environments.

From the Cold War era to today, the shifts involved changes to the U.S.’ troop level, deployment strategy and operational concepts ― which, sometimes, triggered friction in bilateral relations or served to cement the strategic partnership.

The alliance is now headed for another crucial shift as a financially strained U.S. seeks to reshape its forces, with an emphasis on naval and aerial power following more than a decade of land-centric warfare in Iraq and Afghanistan. 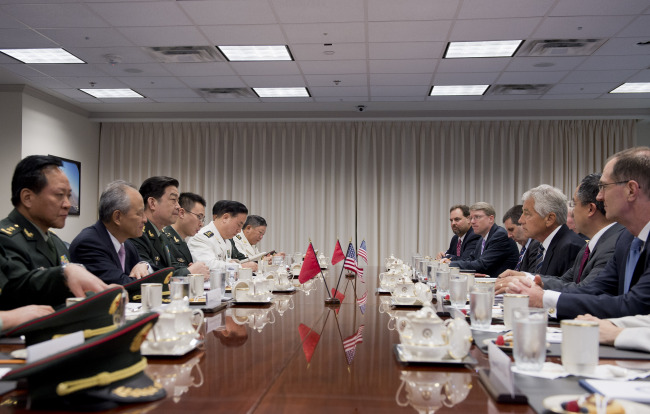 Chinese State Councilor and Defense Minister Chang Wanquan (third from left) meets with U.S. Secretary of Defense Chuck Hagel (third from right) in the Pentagon in Washington, D.C., Monday. (Xinhua-Yonhap News)
“With the critical variable of budgetary constraints in mind, Washington appears inclined toward minimizing its military engagement overseas as seen in the case of the Syrian civil war,” said Park Won-gon, a security expert at Handong Global University.

“Against this backdrop, Seoul is preparing to retake wartime operational control with the December 2015 timetable and the alliance is on its way toward another fundamental change.”

As its Joint Chiefs of Staff Chairman Gen. Martin Dempsey put it, the U.S. military is now confronting a “strategic inflection point,” while grappling with large spending cuts and an increasingly powerful, assertive competitor: China.

At this juncture, Washington is striving to develop more cost-effective, smarter operational concepts to maintain its preponderance, particularly in the Asia-Pacific ― an emerging hub of power to which Washington has shifted its strategic focus.

As a core U.S. ally, South Korea has kept close tabs on U.S. military developments as it seeks to reform its own military and map out more effective plans to handle relentless military threats from North Korea.

The U.S. in recent years has focused on developing operational concepts to tackle what it calls “anti-access/ area-denial” challenges posed by China and other potential adversaries.

With cruise and ballistic missiles, bombers and other advanced weapons with longer operational ranges, and greater lethality, accuracy and survivability, Beijing has been advancing its A2AD capabilities to keep at bay any unfriendly forces ― potentially the U.S.

Anti-access or A2 refers to action that prevents a hostile military force from moving toward a specific operational area, while area-denial or AD means action aimed at obstructing any maneuvering within the area.

China’s pursuit of the A2AD assets is in line with its long-term, consistent maritime operational objective that covers not only the South and East China seas, but also virtually the entire world by 2050.

Starting from what analysts term the “first island chain,” China strives to expand its sphere of influence farther into the Pacific by developing its blue-water navy and formidable naval assets, including its first aircraft carrier, Liaoning. 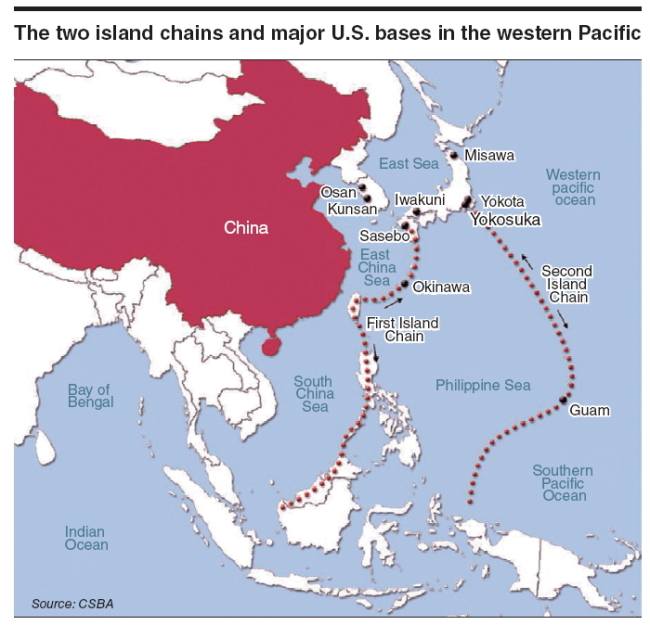 The first island chain is a string of archipelagos in the East Asia that links the Japanese archipelago, Ryukyu islands, Taiwan and the northern Philippines. Analysts believe China seeks to project power far beyond the “second island chain” linking Guam and Indonesia, and all the way into the “third island chain” ― waters near Hawaii.

The U.S. believes China’s A2AD strategy undermines its power projection capability, which it argues is crucial to secure “global commons” such as freedom of maritime navigation and commerce amid China’s increasing assertiveness. Beijing says its strategy aims to fend off any foreign “intervention.”

China has focused on developing the new strategy since the Taiwan Strait Crisis in 1996, when the U.S. mobilized two of its aircraft carrier battle groups in the largest show of its military might in the region since the Vietnam War.

Since then, it has sought to bolster its military capabilities in all domains including space and cyberspace, based on its increasing economic power. This has forced the U.S. to contrive a new operational strategy, which is effective and relevant in the era of fiscal austerity.

To overcome the A2AD challenges, the U.S. has been exploring a set of “offsetting” options in recent years with an aim to create a joint force capable of handling security threats in all domains ― air, land, sea, space and cyberspace.

The most publicized concept is the AirSea Battle concept, which Washington has been fleshing out over the last several years. Since it revealed that it was working on the concept in the Quadrennial Defense Review in 2010, it has established an AirSea Battle office to advance the concept and has sought to acquire the military assets to support it.

Patrick M. Cronin, senior director of the Asia Program at the Center for a New American Security, said that the AirSea Battle is the “latest name given to a never-ending quest to prepare for the future.”

“AirSea Battle is shorthand for thinking through how to use combined arms against an array of improving capabilities to deny their use,” Cronin said.

“The name implies a primary focus on naval and air assets, but the spirit of the concept includes ground forces, too, as the U.S. Armed Forces thinks through technological changes that would make any battle different from the one they have had to prepare for in the past.”

Some analysts say the AirSea Battle concept meshes with Washington’s “rebalancing” policy toward the Asia-Pacific as its vital missions to safeguard core island or semi-island allies ― namely, Korea and Japan ― and crucial sea lanes of communication in the region are conducted mostly from or over the sea.

But critics have raised suspicion that the concept was driven partially by the Navy and Air Force scrambling to grab bigger budgets amid government spending cuts. The two services were somewhat excluded from the last decade of Army-centric warfare.

Apparently to contest the thriving AirSea Battle, the U.S. Army and Marines came up with the Gaining and Maintaining Access concept, which they appear to have recently upgraded into a new concept of “Strategic Landpower” by involving Special Operations Forces.

Calling itself an “indispensible foundation of the joint force,” the U.S. Army stresses the “human domain” will continue to be the critical element in tackling future conflicts.

“(Soldiers’) efforts to strengthen the capabilities of our partners, increase our understanding of local dynamics, and build lines of communication between militaries and nations (are) increasingly necessary in a complex interconnected world,” Army Chief of Staff Gen. Raymond Odierno posted in a commentary on the Army’s website in May.

“Soldiers standing side-by-side with foreign militaries provide the nation with strategic access to places and societies that might be otherwise inaccessible,” he added, underscoring: “There is no such thing as a clean or simple war.”

It still remains to be seen how these competing concepts will unfold, but they both fall under the overarching “Joint Operational Access Concept,” which envisions a flexible integration of space and cyberspace operations into the traditional air-sea-land battle space.

No matter which concept takes more strategic attention, they have triggered an angry reaction from China, which believes its “peaceful rise” is being challenged by an increasingly anxious U.S.

The negative response from Beijing also posed a diplomatic challenge to staunch U.S. allies in the region such as South Korea, with which the U.S. has the six-decade-old mutual defense treaty mandating collective defense.

“Some see it as an evolving operational concept to tackle A2AD challenges through improved inter-service cooperation, while others see it in a broader strategic context to deter China’s rising military capabilities,” said Michael Raska, research fellow at the S. Rajaratnam School of International Studies, Nanyang Technological University.

“The ASB concept will be calibrated and refined, particularly with the changes in both strategic environment and operational conditions. There may be also alternative or competing concepts. What is important to understand is that the ASB is only a concept, not a new doctrine,” he added.

Experts largely concur that amid its financial challenges, the U.S. is unlikely to favor a policy requiring a massive military footprint, although it would continue to make its military leaner, more agile and quickly deployable to respond to conflicts of its interests.

“The U.S. is apparently reluctant to engage in another blood-shedding conflict as that involves great political costs. This is part of the reason why the U.S. focuses on naval, air and special ops assets,” said Kwon Tae-young, adviser to the nonprofit Korea Research Institute for Strategy.

The Pentagon has already planned to reduce the Army troop level to 490,000 from a wartime record of 570,000 by 2017. It also plans to cut the number of Marines to 182,000 from about 205,000. The congressionally mandated budget cuts, or sequestration, have raised the prospect of an additional troop reduction.

The U.S. troop drawdown means the South Korean Army should take a greater responsibility in a peninsular contingency, experts noted. Particularly, ahead of the transfer of wartime operational control, they said the South should streamline its commanding structure to increase efficiency and maximize inter-service cooperation.

“The possibility of an all-out war has substantially decreased, but chances of low-intensity provocations remain high,” said Park of Handong University. “With this in mind, we need to foster integration and maximize cooperation among armed services to make our troops a rapid-response force for this limited theater.”

“U.S. allies in East Asia are tracking the conceptual development of the ASB. This is because its operational requirements will likely impact the research, development and acquisition of future weapons technologies in the U.S. military, and subsequently shape the patterns of regional military modernization,” said Raska.

“Accordingly, the principal challenge for U.S. allies is to identify future defense requirements that would mitigate the already existing technological capability gaps with the U.S. military.”

Another crucial challenge to South Korea is that Seoul’s efforts to keep up with the U.S. could lead to friction in its relations with China ― a crucial partner in pushing for North Korea’s denuclearization. Observers said seeking ways to avoid confrontation with China is imperative.

“Chinese assistance in dealing with almost any intervention into North Korea could be important today ― the ROK (Republic of Korea)/U.S. need to work on cooperation with China,” said Bruce Bennett, senior defense analyst at the RAND Corporation.

“Such cooperation will be even more critical in future years after the ROK is forced to reduce its military because of its demographic problems.”