South Korea on Tuesday proposed talks with the North on Sept. 25 to restart the stalled tours to Mount Geumgang after a five-year freeze in a fresh sign of thaw in cross-border relations.

The surprise announcement came two days after Pyongyang accepted Seoul’s offer of talks to arrange the first reunions of separated families in almost three years and proposed a separate meeting on Thursday over the tour project.

While stressing the need to deal with the two issues separately, the Unification Ministry said the decision reflects its position that the two Koreas should “build trust and develop their relations step by step” with the recent breakthrough on reopening the Gaeseong factory park. 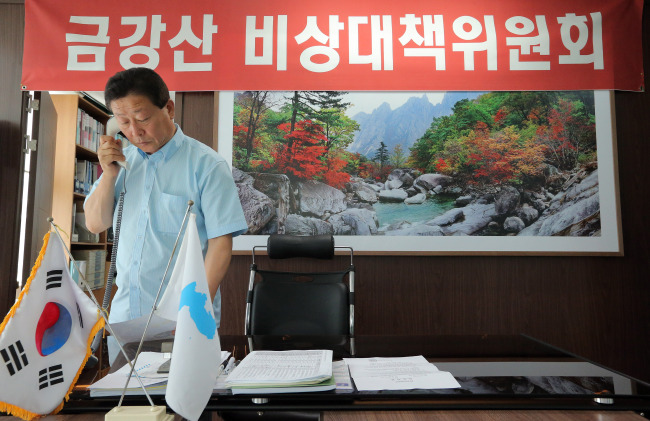 Sin Yang-soo, vice chairman of the Mt. Kumgang Entrepreneurs Association, talks on the phone in his office in Seoul. The association has called for the government to resume the suspended tour project. (Yonhap News)
“While implementing concrete measures for the future-oriented normalization of the Gaeseong industrial complex, there is a need to successfully carry out family reunions, a principal humanitarian issue given the sad reality that old members of the separated families are passing away,” the ministry said in a statement.

“As for the Geumgang tour issue, we can explore developmental solutions with a more prudent approach given various factors, such as the fact that five years have passed since its suspension.”

The decision apparently epitomizes the Park Geun-hye administration’s resolve to sustain the mood for cross-border reconciliation, boosted by the agreement on Aug. 16 to take steps to reactivate the factory zone.

Pyongyang on Sunday proposed a meeting at Mount Geumgang to arrange family reunions for September and resume tours to the mountain resort, but Seoul had only agreed to talks on the reunions, putting off a decision on the tourism project.

The delay reflected lingering tension stemming from the 2008 death of a South Korean tourist and concerns about a suspected diversion of the program’s revenues.

Once touted as a symbol of cross-border cooperation, the tours to the scenic mountain on the east coast were launched in 1998 but have been on hold since a South Korean tourist was shot dead by a North Korean soldier in July 2008 when she strolled into an off-limits area.

The South has demanded an apology and measures to preclude a relapse and to ensure the safety of its people.

“The government’s position is that the tours were halted due to the death incident and it must never happen again. There must be a clear resolution on this issue before restarting the program,” a Unification Ministry official said on condition of anonymity due to the sensitivity of the subject.

“It is inappropriate to link the separated families issue with others. We’re trying to put it back on track in a way that is fit amid the overall situation.”

Past dialogues over the project’s restart failed to yield a breakthrough. The North on July 10 offered fresh consultations to resume family reunions and Geumgang tours but called them off after the South only accepted the more urgent reunions to focus on the then-ongoing negotiations over the Gaeseong industrial park.

In Sunday’s statement by the Committee for the Peaceful Reunification of Korea, the North said the two sides could “comprehensively discuss and resolve the issues of the South’s concern, including accident prevention, personal safety and assets.”

The communist country’s push apparently underscores its emptying coffers and desperate struggle to secure the means to shore up its antiquated economy amid international sanctions and isolation over its nuclear development.

After the collapse of talks in February 2010, the North froze and confiscated South Korean assets there and forced out staff. It has since made the resort a special tourism zone and attempted to run it on its own or in partnership with other countries such as China, but the efforts made little outcome.

Pyongyang is believed to have raked in about $1.5 million in 2006 and $2 million in 2007 through the tour program. Skeptics have opposed its resumption, accusing the regime of siphoning off the proceeds into its nuclear programs.

Businesspeople on Tuesday called on Seoul to accept talks for the tour project, stressing their now-incalculable losses due to its suspension.

“After five years, the government still lacks the willingness to resume the tours, which will increase the people’s pain,” an association of Geumgang-based entrepreneurs said in a statement.

“The government should face up to the difficulty of the businesspeople engaged in the Geumgang tours and come forward immediately for the talks.”