President Park Geun-hye urged Tokyo to take “responsible, sincere measures” to heal the scars of the victims of Japan’s past militarism during a ceremony marking Korea’s 1945 liberation from the archipelago country’s colonial rule.

“Although Japan is an important neighbor to promote peace and prosperity together in Northeast Asia, recent circumstances surrounding historical issues darken the future of the bilateral relationship,” she said.

“It is hard to accumulate trust on our way toward the future if (one side) lacks the courage to face up to history and the willingness to grasp and care for the agony of the other side.”

Her remarks were seen as a renewed call for Tokyo to apologize and compensate for its sexual enslavement of Korean women during World War II. Seoul has pushed to quickly resolve the issue as many victims in their late 80s have died of old age.

During a luncheon with surviving independence activists and families of the deceased at Cheong Wa Dae, Park said Seoul would remain firm in its stance on history.

“No matter how painful they may be, scars will heal as time goes by,” she said.

“But I felt sorry that your agony might have deepened as Japanese politicians appeared to be retrogressing into the past and repeatedly made remarks that they shouldn’t have made.”

Some 100 lawmakers also paid homage at the site.

Japanese Prime Minister Shinzo Abe refrained from visiting, but offered a tributary payment to it under his political title of Liberal Democratic Party chairman.

Shindo told reporters that his tribute to the war dead was “personal” and would not have negative diplomatic ramifications, while Furuya said the visit to the shrine was not a thing for neighboring states to decry or meddle in. 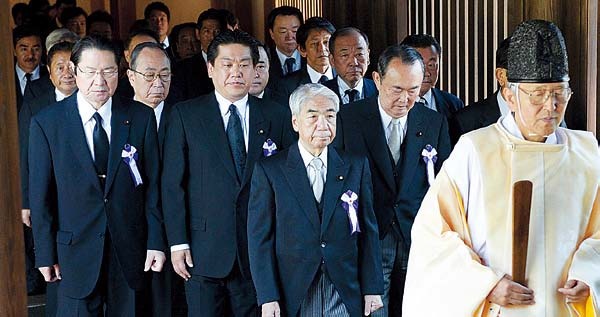 A group of lawmakers are led by a Shinto priest as they visit the Yasukuni Shrine in Tokyo Thursday, on the anniversary of Japan’s surrender in World War II. (Yonhap News)

Supporters display masks as they demand an apology from Japan over the comfort women issue during a demonstration in front the Japan Interchange Association in Taipei on Wednesday. (AFP-Yonhap News)
Seoul’s Foreign Ministry called their visit “deplorable.”

“Japanese top politicians and officials’ pilgrimage to the shrine, which glorifies the imperialist history, shows that they still turn a blind eye to the (truth of) history,” it said in a press release.

Japan’s Vice Premier Taro Aso, Chief Cabinet Minister Yoshihide Suga and Foreign Minister Fumio Kishida were reported to have decided not to visit the shrine in consideration of diplomatic risks.

The relations between Seoul and Tokyo have worsened in recent months as high-profile Japanese politicians including Abe have spewed out provocative remarks downplaying or denying the country’s wartime crimes.

Amid worsening public sentiment, Park has not moved to arrange a summit with Abe, who has offered to hold talks with her several times.

Some experts stressed the need for Park to see better ties with Tokyo as diplomatic tension with Japan could pose a hurdle to her initiative to build trust among countries in Northeast Asia for peace and prosperity.

Observers anticipate that Park and Abe could hold talks during multilateral summits slated for next month and October. The Group of 20 summit is scheduled to take place from Sept. 5-6 in Russia while the Asia-Pacific Economic Cooperation Summit is to be held in Indonesia from Oct. 7-8.

The bilateral ties have also deteriorated as Tokyo continues its claim to the Dokdo islets, which are under Korea’s administrative control.

To counter any outside forces’ amphibious landing on the islets, the South Korean Navy conducted maritime drills in June with the mobilization of 10 naval vessels including a 3,200-ton destroyer and a 1,200-ton submarine; F-15 fighter jets and P-3C surveillance aircraft.

“Our military has been making all our efforts to protect maritime sovereignty and territory. Dokdo, part of our territory, is not an exception,” an unnamed military official told media.

The Korean military conducts drills defending the Dokdo islets about twice a year. The Navy plans to stage another exercise later this year.