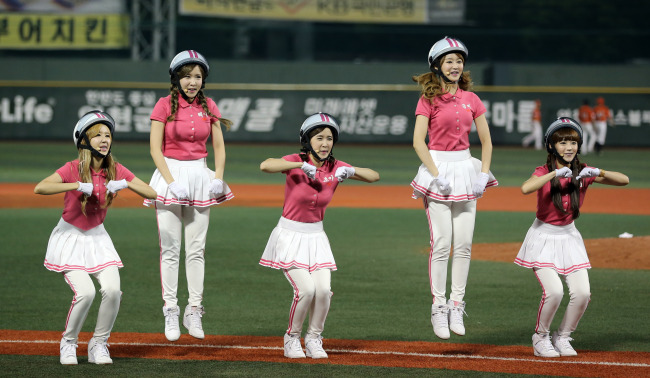 Crayon Pop performs “Bar Bar Bar” at Mokdong baseball stadium on Aug. 1. (Yonhap News)
A motorcycle helmet, a polo shirt buttoned up to the neck and loose jogging pants under a skirt: These are the costumes that members of girl group Crayon Pop decided to wear while hitting the stage with their latest single “Bar Bar Bar.”

When South Korea’s music industry is flocked by girl groups competing with each other to show who can be sexier or sweeter, Crayon Pop’s tactics to distinguish itself from others with a comic concept seems to be working well.

Hwang Hyun-chang, the chief executive of Chrome Entertainment, Crayon Pop’s agency, said the group’s birth started from a simple question: “Why are all girl groups the same?” And the team’s image was carefully planned starting from the audition process.

“I eliminated the candidates who were taller than 165 cm or had sexy images. I also excluded high school students even though they sing well,” he said in an interview with Chosun Ilbo.

The group has five members -- Cho-a, Ellin, Way, Soyul and Gummi -- aged between 22 to 25, not a young age to be a girl group here compared to others starting their career in high school or even middle school.

“I wanted to make a group that has the image of ordinary girls living in the neighborhood who we cannot hate,” Hwang said.

“Bar Bar Bar” ranked at the top of music charts on the country’s biggest digital music site Melon on Saturday, a month after the group released its second single on June 20.

The official music video on YouTube has been viewed more than 1.6 million times as of Thursday.

The song features simple and addictive melody and lyrics, perfectly matching with their comic book character-like dance moves, jumping up and down on the stage.

The group’s iconic choreography which fans named as the “series five-cylinder engine dance,” is easy to copy, resulting in a number of parody clips by Korean celebrities and K-pop fans around the world.

The five-member group released their first EP album and digital single in July and October 2012, respectively, but failed to gain much popularity.

Crayon Pop fever hit after the music video for “Bar Bar Bar” spread by word of mouth via social networking services and online communities, much like Psy’s hit “Gangnam Style.”

The age range of fans, mainly men in their 30s and 40s, is one of the unique characteristics of the group. Every time Crayon Pop performs on television, some 100 fans sporting helmets gather outside the studios to catch a glimpse of their idols and shout “I love Crayon Pop.”

Some pop culture critics warn that the girl group needs to convince the world that the hit was not a one-time success, with the upcoming album to be unveiled in September.