[ The Korea Herald – Send E-mail ]
New bands get a boost from ‘K-Rookies 2013’
KOCCA program fosters alternatives to K-pop offerings
By Korea Herald
Published : Aug 6, 2013 - 20:13
Updated : Aug 6, 2013 - 20:13
Emerging rock bands PaperTree and OopsNice will take to the stage in the last installment of the “K-Rookies 2013” concert series to be held at Muse Live, a 240-seat entertainment venue at Seoul Olympic Park, southern Seoul, on Aug. 17. This is the third concert featuring new bands, following performances by Je’she and Some Birds on June 22 and Round Heads and South Carnival on July 20.

Organized by the Korea Creative Content Agency and launched last year, “K-Rookies” aims to support talented, emerging musicians in genres beyond the electronic tilt of K-pop.

“We introduce many young, talented musicians and provide them with stages to perform and a chance to appear on stage with more experienced artists,” Choi Hee-jin, assistant manager of KOCCA’s creative industry promotion division, told The Korea Herald. 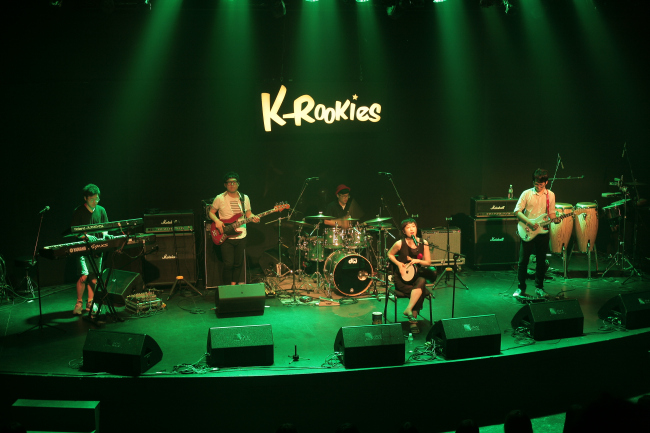 Round Heads performs during a “K-Rookies 2013” concert at Muse Live on June 20. (KOCCA)
PaperTree is a three-member modern rock band that is best known for its emotional lyrics and melodies. It released its first EP “Forget and Leave” in 2011 and with its latest digital single “Mad” released earlier this year, the band began to gain attention as a potential leader of the next generation of Hongdae indie bands.

OopsNice is a five-member rock band with a female vocalist. The band has been broadening its reach by performing in many rock festivals both domestically and internationally, such as the recent Coke’n Beat 2013 held in Ulan Bator, Mongolia.

The state-run content agency held an open audition for “K-Rookies 2013” in May during which PaperTree and OopsNice were selected along with Je’she, Some Birds, Round Heads and South Carnival as K-Rookies of the Year, from among some 200 teams. Since then KOCCA has assisted the six winning teams in new album releases and making music videos, and provided them with opportunities to perform at large-scale festivals and on television shows. The six groups will take to the stage again altogether at a year-end concert on Nov. 23, when the best three will be awarded prize money.

Meanwhile, the witty female folk duo Okdal (Oksangdalbit) and a four-member synthpop band Peterpan Complex will also perform on Aug. 17 to support the rookie bands. Okdal will present their own bright, cheerful songs based on acoustics while Peterpan Complex will have a special stage celebrating their 10th anniversary.

Admission to the concert is free. For more information about this performance, visit the official blog indiecoaster.tistory.com.