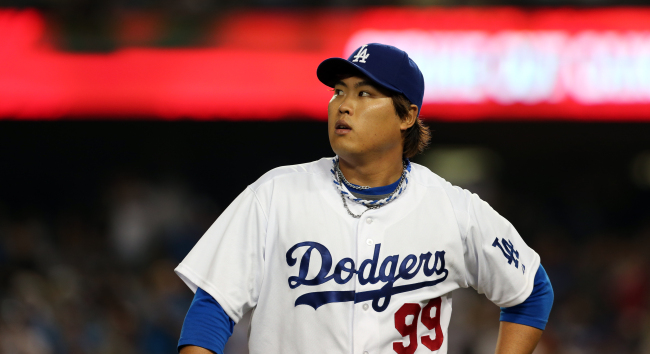 At Dodger Stadium, Choo went 0-for-2 with a walk against Ryu in their first big league meeting. Ryu earned the ninth win of his rookie season by pitching seven strong innings, giving up only one earned run on two hits and a walk while striking out nine.

The Dodgers defeated the Reds 4-1.

Choo, the leadoff man for the Reds, walked on five pitches to start the game and reached second on a sacrifice bunt by Chris Heisey. But Ryu retired Joey Votto and Brandon Phillips with groundouts to strand Choo.

In the third inning, Choo weakly grounded out to first with one out and no one on base. Leading off the sixth, Choo struck out swinging on a curveball in the dirt. Ryu was replaced by the pinch hitter Jerry Hairston in the bottom seventh.

In his final at-bat of the game, Choo hit a grounder to short against the Dodgers' closer Kenley Jansen. He finished the game 0-for-3 with a walk, and his average is now at .285 for the season.

It was the 15th South Korean pitcher-batter duel in MLB history, and the first since July 2010, when Choo, then playing for the Cleveland Indians, struck out swinging in his only at-bat against Park Chan-ho of the New York Yankees.

The Dodgers scored the first run in the bottom first on an RBI double by Hanley Ramirez. Jay Bruce tied the score for the Reds with a solo shot off Ryu in the top second. Then in the bottom fifth, Skip Schumaker belted a tie-breaking two-run home run off the Reds' starter Bronson Arroyo to make it 3-1 for Los Angeles, and that proved to be more than enough run support for Ryu.

After giving up a triple to Heisey in the top third, Ryu retired 13 batters in a row before leaving the game after the top seventh. In that stretch, Ryu struck out seven and only one ball even left the infield.

The Dodgers made it 4-1 in the bottom seventh thanks to Adrian Gonzalez's single up the middle, and three relievers kept the door shut on the Reds to seal the victory.

The Reds will host the Dodgers from Sept. 6 to 8 for their second and final series in 2013. (Yonhap News)