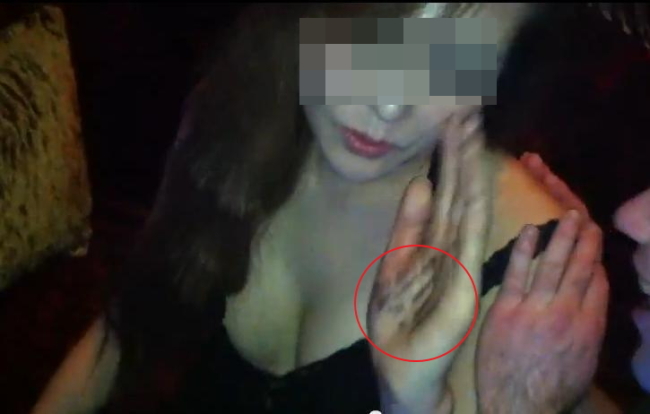 The Korea Herald recently obtained two videos from a person claiming to have participated in creating the controversial viral video of two Western men sexually harassing a Korean woman. This footage from one of the new videos shows that the woman has words, which may be lines from the script, written on her hand.

In the clips, both of which are about two minutes long, two foreign men in a nightclub act out a scene in which they sexually harass a seemingly inebriated woman and mock her over the condition of her teeth.

The two newly revealed videos feature the same arc of the viral video but with slight variations, such as in the men’s use of profanities. At the end of the clips, the woman storms off in apparent disgust at being humiliated, just as in the original.

One of two Korean men involved in making the film, a film studies graduate of a Seoul university and a film competition entrant, revealed the footage on Thursday on condition that it would not be made public.

He had previously expressed concern at the online reaction the video had caused, but had claimed not to be in possession of any footage.

The two foreign actors, one of the filmmakers, a woman who interpreted on set and a mutual acquaintance had all previously claimed that the viral video was part of a series of horror film shorts.

Numerous media outlets, including the Daily Mail, have yet to retract or update their coverage of the video, which they reported as genuine. The Washington Post on Thursday updated its original story on the video, acknowledging that it was likely staged.

The original video, which depicts a man filming an apparently drunk woman’s chest and legs as his friend hurls profanities at her, was covered by numerous Korean and foreign outlets and caused anger among Internet users. Some Internet users lambasted the men involved, while others accused the woman of embarrassing her country, blamed her for being drunk or accused her of sexual promiscuity.