[ The Korea Herald – Send E-mail ]
[Newsmaker] Two Koreas, U.S. mark Korean War armistice
By Korea Herald
Published : Jul 25, 2013 - 20:40
Updated : Jul 25, 2013 - 20:41
The two Koreas will hold separate ceremonies to mark the 60th anniversary of the armistice on Saturday with two very different aims. Seoul will use it to honor war veterans from home and abroad, while Pyongyang will seek to strengthen internal unity.

The U.S. will also hold a ceremony in Washington, D.C., where President Barack Obama is expected to participate for the first time as an incumbent leader. 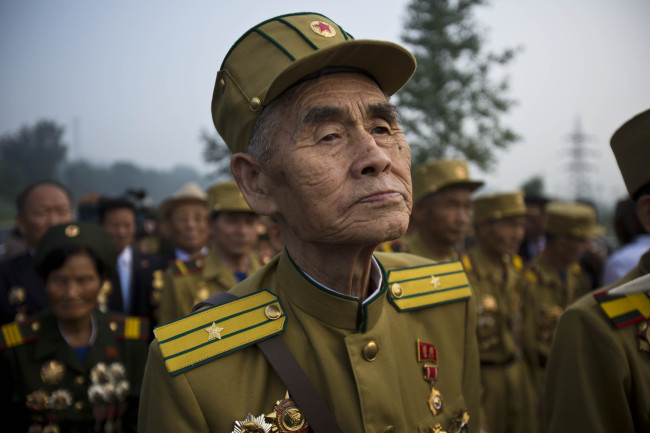 North Korean veterans of the Korean War enter a cemetery for Korean War veterans on Thursday, July 25, 2013 in Pyongyang, North Korea during an opening ceremony marking the 60th anniversary of the signing of the armistice that ended hostilities on the Korean peninsula. (AP-Yonhap News)
During its ceremony, Pyongyang is to hold a massive military parade, which its young leader Kim Jong-un will attend. The North has been seen rehearsing for the event with some 10,000 troops and its top military equipment.

Observers expect the communist state to unveil new weapons systems such as a new type of long-range missile, which could further escalate security concerns regardless of their authenticity.

In the ceremony, the North is expected to claim that it fought and won in the war against the world’s greatest military power, the U.S., in order to bring its people together and strengthen the legitimacy of the fledgling leadership.

It also appears likely to use the ceremony to send a message to the outside world, perhaps something to help address its deepening international isolation stemming from its persistent development of missiles and nuclear arms.

To promote the ceremony, the North has invited foreign media outlets such as the Associated Press, CNN, Xinhua News Agency, BBC and Kyodo News Agency. It also sent invitations to communist party leaders across the world.

Seoul’s ceremony focuses on appreciating government officials and veterans from 27 countries including wartime U.N. allies and Korean veterans, and highlighting the importance of international efforts for peace and stability on the peninsula.

The U.S. is also to hold a large ceremony with top U.S. officials including President Obama and Defense Secretary Chuck Hagel in attendance.

It would be the first time for a current U.S. head of state to participate in the armistice ceremony. In 2006, then Vice President Dick Cheney joined the 53rd anniversary of the armistice.