The figure represented the fourth straight rise since 2008, when 20.6 percent of the city’s population were classified as obese. The report may have come as a surprise to many Koreans who have traveled to Western countries, not to mention the city’s foreign residents: Seoul would not appear to be a city of large people, especially compared to urban centers in North America and Europe.

Such a reaction would not simply be a matter of perception: the high figure is partly a result of Korea’s strict standards for defining obesity relative to Western countries. The use of body mass index, an indication of body fat derived from height and weight, is where similarities in assessment end. Whereas other developed countries and international organizations such as the Organization for Economic Cooperation and Development and World Health Organization define obesity as a BMI of 30 or higher, Korea uses a BMI of 25 or above. 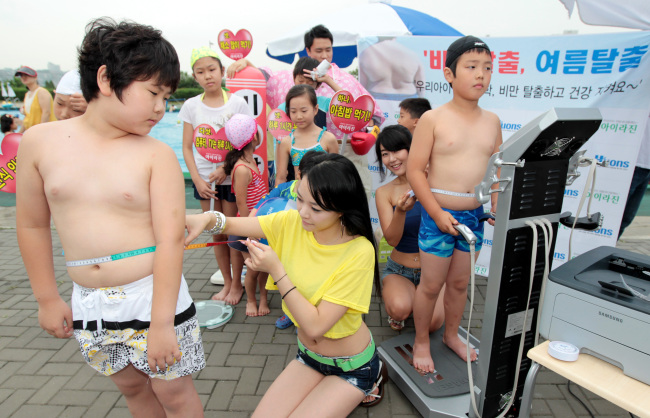 Children participate in an obesity awareness event. (The Korea Herald)
As a result, the OCED regards just 4 percent of Korea’s population as obese, the lowest proportion among member countries. The proportion of the public considered to be obese or overweight rises to 30 percent.

Whether different standards should be used to assess obesity among Koreans and other East Asians remains an unsettled question.

“It is true that for some Asian countries we can use lower levels of BMI to define these thresholds, but there is no consensus on that question,” Marion Devaux, an OECD health analyst, told The Korea Herald. “We use one unit of comparison across countries.”

While the WHO has reported that East Asians have higher body fat percentages at lower BMIs, it has recommended that standardized cutoff rates be retained for international comparison.

On the other hand, Oh Sang-woo, a professor of medicine at Dongguk University International Hospital’s Center for Obesity, Metabolism, and Clinical Nutrition, said that it made sense for Koreans to be measured by a harsher standard than other ethnicities.

“(The) cutoff point of obesity in Asians should differ from that of Westerners. Previously, many studies showed that Asians are more vulnerable to obesity complications ― type 2 diabetes, dyslipidemia, hypertension, and others ― than Western populations,” said Oh.

“For example, Americans are much more highly obese than Koreans. But the prevalence of type 2 diabetes, hypercholesterolemia, hypertriglyceridemia, hypertension and others in Koreans is similar to that of Americans. We believe that differences in genetic and environmental factors cause this differential effect of obesity on these diseases.”

The Ministry of Health and Welfare shares a similar view. Kim Yoo-mi, deputy director of the dietary and life nutrition taskforce at the ministry, said that Japan, China and Southeast Asian countries used the same, lower BMI to define obesity.

“It is because Asians with BMI over 25 usually start to show symptoms of obesity-related diseases like hypertension and diabetes,” said Kim. “It is not that Korea has legally put BMI 25 as the standard point for obesity. But it is under discussion whether to legally enshrine the use of a BMI of 25 when defining obesity.”

Kim said the ministry’s current goal was to keep the obesity rate stable in the coming years by encouraging people to maintain a healthy weight.

But whether using international or localized standards, an indiscriminate scan of the figures doesn’t reveal the nuances of the situation in Korea. While obesity overall is low by international comparison, child obesity is relatively high.

“For adult obesity, Korean performs quite well. As you have said, OECD figures show 3-4 percent of adults are overweight but for children it is different,” said Devaux.

“And we have about 35 percent and 22 percent of girls which are overweight or obese … The average is about 20 (percent) across OECD countries. For instance, the level of child obesity in Korea is broadly the same as the level in the U.S.”

Not everyone, however, is convinced that obesity in Korea is that serious a problem, especially compared to the issues of malnourishment and body image anxiety. Although extreme obesity among women has doubled since the late 90s, the proportion of women classified as underweight has dramatically increased over the same period. In 2010, almost 20 percent of young women were regarded as underweight by the government.

Ahn Chang-hye, a sociology graduate student and sex education instructor, said the pressure on young people, and women in particular, to conform to idealized body standards was a much more pressing concern than obesity at present.

“It depends on the age, but I still don’t take obesity itself as a serious problem compared to the body image issues,” said Ahn. “At least for younger people, I think the body image issue is so huge, obesity won’t be a big deal for a while. I mean, unlike many other Koreans choose to believe.”

Ahn said this pressure was especially strong for Koreans compared to other nationalities.

“People (in Korea) are more likely to make direct comments about other people’s appearance and there is very little awareness that those comments can be unnecessary or inappropriate,” said Ahn.

“Many Koreans hear multiple, repeated comments about their weight by family members, friends, and acquaintances on a more direct and offensive level.”

But despite Korea’s low obesity prevalence compared to other rich countries, Oh warned that the problem was far from trivial. He said that the increase in the size of Koreans was already having a major impact on public health.

“Recently, disease patterns in Korea have rapidly changed due to obesity. Several decades ago, diseases such as tuberculosis, hepatitis B, lung cancer ― due to smoking ― stomach cancer and stroke were the most common life-threatening ailments. But these patterns have changed rapidly with the rise of the obesity epidemic,” said Oh.

“Obesity-related conditions such as type 2 diabetes, cardiovascular disease, breast cancer and colon cancer have become prevalent and the main causes of death in Korea. So, the recent obesity epidemic in Korea wields a great influence on disease patterns in Korea.”

My friends and I have recently been discussing the observation that Korean people seem to be gaining weight rapidly. I’ve been in Korea for two years and even during this short time have seen the number of overweight people rise significantly, from almost never seeing an overweight Korean person to seeing them quite commonly. My opinion is that this rise correlates to a rise in popularity of “Western” style junk food, portion-size increases and the additives of sugar and preservatives in snacks and drinks.

Additionally, as more and more people are entrenched in the sedentary “student” lifestyle, they seem to gravitate toward quicker, easier, more unhealthy food options while getting less and less exercise.

I’ve found it easier to maintain a healthy diet in Korea than in America, but I rarely eat Western food unless I make it myself. On the whole I eat much more Korean food than Western food, even though I am American, and I feel healthier and have more energy for exercise.

The speed at which Korean people seem to be gaining weight is, I think, cause for concern. It could soon become a Korean national problem like the obesity “epidemics” in the U.S. and other Western nations where obesity is now one of the main killers, increasing the risk of heart disease, diabetes, high cholesterol and high blood pressure.

Although weight hasn’t been an issue for most Korean people before now, because of the shifts in economy, technology and culture, Korean parents and children are going to have to become more educated about the effects of their food choices, to opt for the kimchi and bibimbap more often than Korean junk food like schnitzel, ramen, fried mandu and preservative-laced convenience store meats.

I think the Korean government and media needs to start exploring and championing this issue to help educate the younger and older Korean generations before it’s too late.

I am going to say no. The obesity issue is more widespread and prominent in western countries than in other nations. However, having said that, there is a huge growth of fast food restaurants in Korea, especially in cities. This strong demand for fast food may have an impact on the obesity rate in the country. In addition, individual preference of fast food over traditional restaurant food is also a worrisome problem.

I came back from Seoul last month after staying in Korea for 4 months as an exchange student at Seoul National University. I would like to share my opinion with you on the topic of exchange students’ life in Korea. For the first month I stayed in Korea, March 2012, I think it was a very difficult time for me because I could not adapt myself to the weather in Korea. It was minus 1 degree Celsius at that time. Since I came from Thailand where the weather is either hot or very hot, I was not so sure that I could endure that time.

Moreover, I had culture shock, such as how people always bump into each other even when there is a way they can avoid doing so. There is no apology either. However, I do love Korean culture and Korean food so much. I enjoyed traveling around Korea also. I think that since there are a lot of exchange students coming to Korea every year, it would be great if every university had some organization that helped exchange students with living in Korea or finding Korean friends for them since I also believe that having Korean friends as an exchange student can help us adapt to Korean culture better.