The chief executive of UI Energy Corp., a resources developer, and Hyundai P&C, a maker of coating and paint products, is suspected of misappropriating about 41.6 billion won ($34.2 million) in funds from the two companies. He was not detained.

Choi was at the center of a series of influence-peddling scandals in 2002 including one involving then President Kim Dae-jung’s third son Kim Hong-gul. 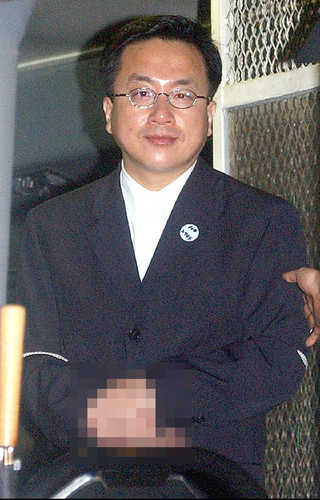 Choi Kyu-sun
He served a 2 1/2 year term in prison for bribery charges starting that year.

According to Seoul Central District Prosecutors’ Office, he is accused of pocketing about 26.3 billion won that his energy company had received in cash from the Kurdish authorities for constructing a packaged power station in the region between November 2007 and May 2008.

The company manipulated its public financial statements from 2007 and 2010, pretending it had not taken the payment, the prosecution said.

He allegedly used most of the money to repay personal debts.

To fill the gaps in the company coffers, he later siphoned some 4.5 billion won and 10.8 billion won from UI Energy and Hyundai P&C, respectively, by cooking their accounting books, according to the prosecutors.

Before UI Energy issued new stocks in October 2011, the company issued a fraudulent press release that a huge reserve of natural gas had been found in the Kurdish area in which it has a stake. It said that, as a result, it would earn about 90 billion won in profit.

They added that Choi manipulated company documents when the firms were inspected by the National Tax Service and the Financial Supervisory Service.

The prosecution began the inquiry in May last year after the Securities and Futures Commission filed a complaint on suspicion that the company manipulated its corporate bank books.

Prosecutors have requested an arrest warrant for him twice so far but the court has rejected their appeals.

In 2002, Choi was convicted of taking kickbacks in return for helping businesses win favors from politicians and senior government officials. He was found to have funneled some of the money to Kim Hong-gul.