She captured the Manulife Financial LPGA Classic at Grey Silo Golf Course in Waterloo, Ontario, Canada, on Sunday, beating American Angela Stanford with a birdie on the third playoff hole.

Park and Stanford tied for an LPGA Tour all-time low with 258 shots over 72 holes. The record was first set by Karen Stupples of England at the Welch’s-Fry’s Championship in 2004. 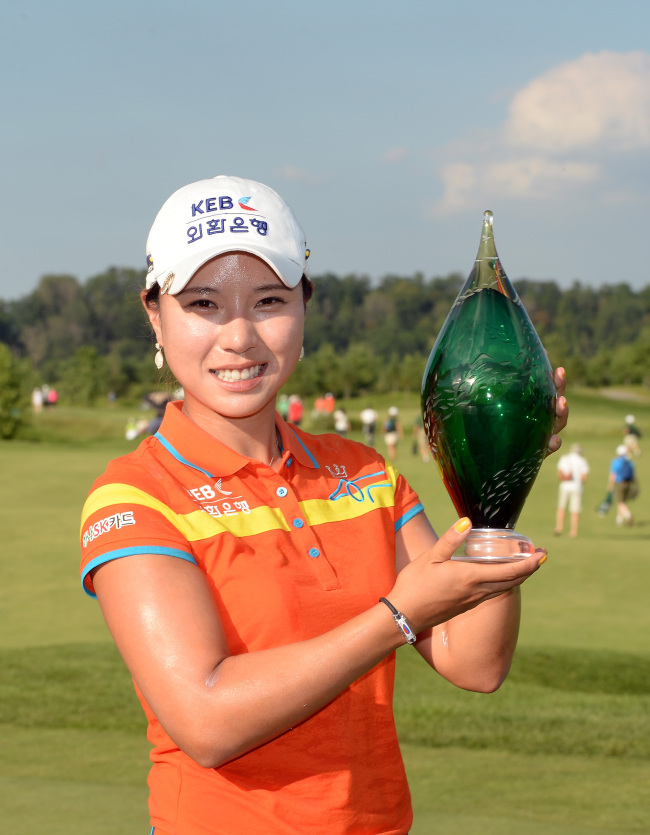 Park Hee-young. (Yonhap News)
She is also the fourth South Korean golfer to win on the LPGA Tour in 2013. Park In-bee leads the pack with six wins, with one victory apiece by Shin Ji-yai, Lee Il-hee and Park Hee-young. World No. 1 Park In-bee shared 14th place with Jessica Korda at 16-under 268.

Park’s Manulife win is the ninth for a Korean golfer on the LPGA Tour this season.

The 26-year-old was a three-year member of the Korean national team from 2002 to 2004. In 2004, she turned professional after winning the Hite Cup on the KLPGA as an amateur.

While her compatriot rivals such as Choi Na-yeon, 26, and Shin Ji-yai, 25, got into the swing of the LPGA Tour quickly, Park did not impress in her early days on the tour.

In 2009, her second year into the LPGA Tour, she placed second at the Honda LPGA Thailand and tied for second at the Mizuno Classic.

In 2010, she ranked in the top 10 six times but without a win. Then she reached a turning point in November 2011, when she earned her maiden LPGA victory at the season-ending CME Group Titleholders.

She maintained her good form in 2012, having entered the top 10 five times, though she failed to take a trophy.

While Park In-bee, 25, stole the show this year, Park Hee-young was paving her way to a potential championship. She placed third at ShopRite LPGA Classic and joint fourth at North Texas LPGA Shootout, and finally tasted triumph after one year and eight months at the Manulife Financial LPGA Classic.

She started playing golf at 11 and credits her father as the individual who most influenced her career. Her favorite club is her driver. Before she went to the U.S. she called it Rocket because with it she could hit farther than most players in Korea.

She has earned $3.22 million in prize money so far, including the Manulife Financial Classic.