[ The Korea Herald – Send E-mail ]
[Newsmaker] Governor refuses to budge on closed hospital
By Korea Herald
Published : Jul 11, 2013 - 20:24
Updated : Jul 11, 2013 - 21:11
Lawmakers are set to file a complaint with the prosecution against South Gyeongsang Province Governor Hong Joon-pyo after he refused to attend a parliamentary hearing on his closure of a provincial public hospital.

The Assembly’s special committee on the inquiry into the current status of public medical institutions, which is looking into the shutdown of Jinju Medical Center, will determine whether to take legal action against the political bigwig on Friday. 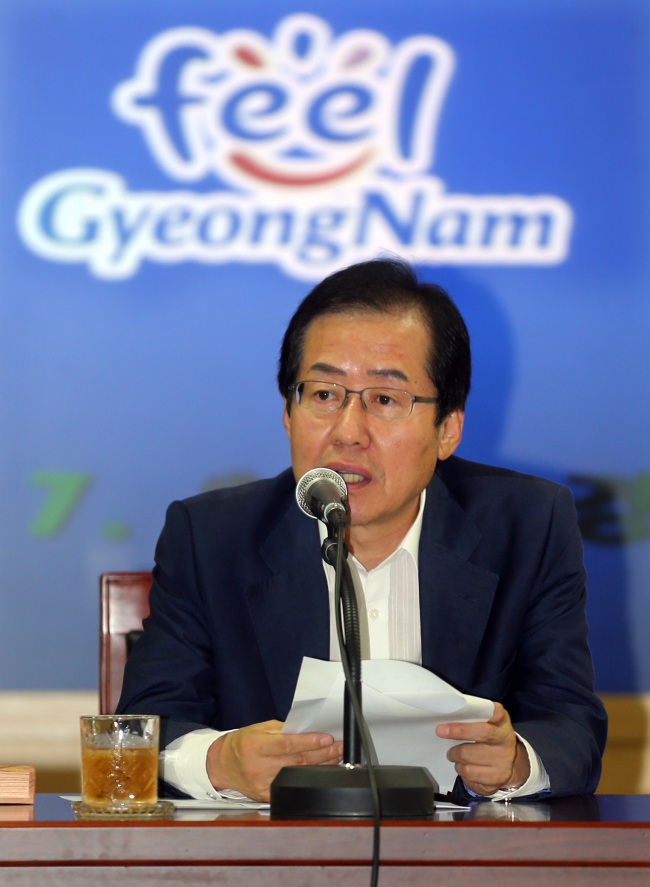 Hong Joon-pyo. (Yonhap News)
After Hong refused to stand before the committee as a witness, the panel’s chairman issued a legally binding order of attendance earlier this week.

Hong, the former chairman of the ruling Saenuri Party, again refused, citing a 2008 Constitutional Court ruling against such an order. The order had been issued by an independent counsel that was investigating a financial scandal involving former President Lee Myung-bak.

The committee countered that the verdict pertained to a case investigated by a special prosecution team and that the regulation in general was still legally effective.

Councilors from the ruling Saenuri Party railroaded the bill for its closure despite fierce protests by the main opposition Democratic Party.

It was approved by a majority of councilors from the ruling party only five minutes after it was put to a vote during an emergency meeting at the provincial assembly.

The governor has been keeping his head up on his closure plan in spite of widespread criticism for abandoning the hospital’s public role.

Union members as well as lawmakers and council members from opposition parties had resisted the plan, blaming the provincial government for applying market principles to a public hospital that was set up to deliver social services to people in the region, not to seek a profit.

The Ministry of Health and Welfare also voiced its opposition to the plan as it contradicted President Park Geun-hye’s ambitious public health projects.

President Park vowed during her presidential campaign that she would expand state investment in cash-strapped public hospitals nationwide to help them continue their public role to serve low-income and elderly citizens.

Despite pressure from the public, political circles and the central government, the governor carried out his vision.

There are a total of 34 regional public hospitals with a combined yearly deficit of 65.6 billion won ($58 million).