At a press conference held in the Pohang City Hall Briefing Room on Monday, Ven. Jangju further revealed the severity of the gambling addiction among some monks, who even went abroad to gamble with the order’s donation money.

“Of course they admit to gambling in the country, but some have even gone as far as Macau and Las Vegas in order to place big bets,” Ven. Jangju said. 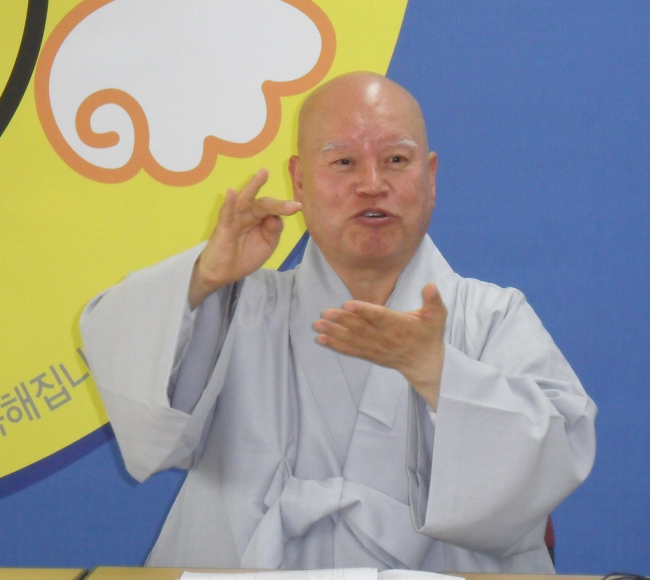 Ven. Jangju of the Jogye Order speaks during a press conference at the Pohang City Hall Briefing Room on Monday. (Yonhap News)
“In the past few years, around 10 of the leading monks of the Jogye Order have gone overseas to gamble while struggling with this serious addiction,” he said. “Over the years, these monks have traveled around the country gambling, placing high-stake bets in card games ranging from 3 million won to 10 million won ($2,700 to $9,000).”

Jangju released a list containing the names of 11 monks who he alleged were involved in gambling, emphasizing that he also participated in gambling and that he is disclosing what he saw. The former head of Oeo Temple in Pohang said he turned himself in to the Prosecutors’ Office and told the authorities about the gambling activities as he deemed the religious order unable to correct itself.

It was also revealed at the press conference that in order to pay off his gambling debts, one of the monks sold the land of one of their temples without approval of the order’s leaders. While the property value was estimated at around 10 billion won, the monk, in desperation, sold the land at less than half its worth, for only 4 billion won.

The controversy first erupted last year when secret footage by a fellow monk showed a circle of Korean monk leaders gambling away more than 1 billion won in stolen donation money at a luxury hotel after a senior monk’s memorial service in April. After the scandal broke, six leaders of the Jogye Order resigned from their positions.