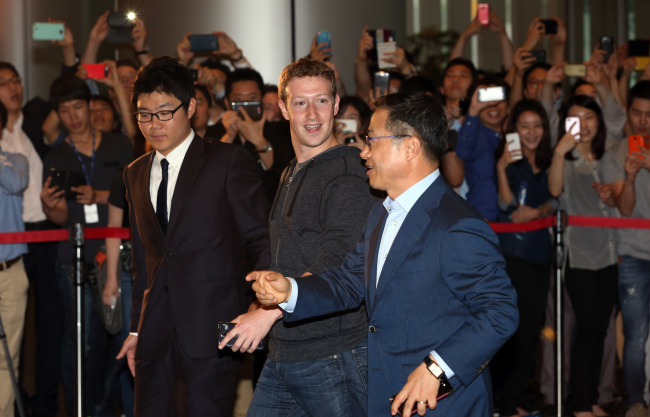 Mark Zuckerberg (center), one of the cofounders of Facebook, walks into Samsung Electronics’ building in southern Seoul on Tuesday to meet with executives of the Korean tech giant. (Yonhap News)

Mark Zuckerberg, one of the young cofounders of Facebook, on Tuesday met with Samsung Electronics executives including the heir Lee Jay-yong and mobile unit chief Shin Jong-kyun to ask Samsung to manufacture a “Facebook-friendly” phone, industry watchers said.

“Facebook has every intention of becoming the second Google, and with that intent in mind, Zuckerberg is said to have asked Samsung to step up cooperation by launching a phone with a Facebook interface,” said one watcher, declining to be identified.

However, Samsung is unlikely to be considering the request for Facebook-platform phone in a positive light, industry experts said, as there is no symbolic or monetary significance in such a deal.

“Samsung doesn’t want to help nurture a second Google, which is now becoming a formidable rival for Samsung in the handset business,” watchers said.

Facebook also does not carry the kind of premium image that Samsung is seeking to carve out in the world, meaning that a “Facebook-friendly” phone would bring no real benefits for the Korean electronics conglomerate.

The meeting, which was one of the key points in Zuckerberg’s short itinerary in Korea, therefore was likely to have come through after much cajoling from Facebook, industry observers said.

Zuckerberg, meanwhile, did not meet with Koo Bon-joon, the head of LG Electronics, another top maker of smartphones, during his trip.

When Google’s cofounder Larry Page visited Korea earlier this year, he met with the heads of both Samsung and LG.

Prior to his visit to the Samsung headquarters, Zuckerberg met with President Park Geun-hye, who has been stressing the importance of creating a creative economy based on the foundation of advanced and integrated information technology and communication.

Zuckerberg said he hoped for the Facebook platform to help the small and mid-sized companies in Korea get a global leg up, according to Cheong Wa Dae sources.

The Facebook cofounder is one of a string of the world’s leading IT or related companies including Bill Gates and Larry Page to have met with President Park.