There are substantial growth opportunities for insurers in the Asia-Pacific region, said some participants for the 49th annual seminar of the International Insurance Society, which kicked off Monday in Seoul.

As the New York-based IIS suggested the reshaping the insurance industry “to capitalize on global trends” as a main topic during the three-day Seoul gathering, some leaders said they regard Asia’s pension market as a gold mine.

Some experts said it is time for insurers intensively focus on Asia with immense growth potential, predicting that winners in the region will become among the industry’s biggest success stories. 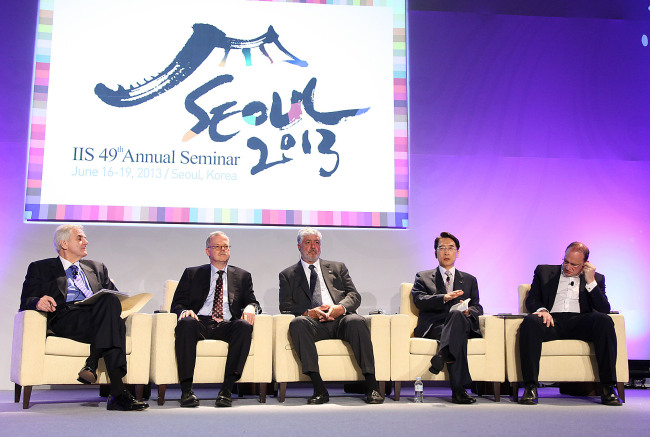 Shin Chang-jae (second from right), chairman and CEO of Kyobo Life Insurance, and other participants including Robert Benmosche (left), CEO of AIG, attend the 49th annual seminar of the International Insurance Society in Seoul on Monday. (Yonhap News)
For the Korean market, pension and insurance investments held by households reached a record high last year as they looked for safety amid a protracted economic slump, according to Bank of Korea data.

Korean financial consumers opted to avert risky assets such as stocks in the aftermath of the 2008 financial meltdown, which was sparked by the collapse of Lehman Brothers.

“The role of insurance, initiated by the private sector, will be bigger in the wake of a low-birth society and aging population,” Kyobo Life Insurance chairman and CEO Shin Chang-jae, who also holds a senior executive post at the IIS, said during his speech at the seminar.

Shin said the future of the global insurance industry depends on efficient countermeasures of companies against unfavorable management environments. He cited factors such as a “changed population structure and global macroeconomic slowdown.”

Among the main speakers were IIS president and CEO Michael Morrissey and Financial Services Commission Vice Chairman Jeong Chan-woo for the first day of their discussion.

Korea has become the world’s eighth-largest insurance market with a market share of about 2.8 percent in terms of insurance premium volume.

There are 23 life and 31 nonlife insurance firms operating in the nation, according to the Financial Supervisory Service of Korea.