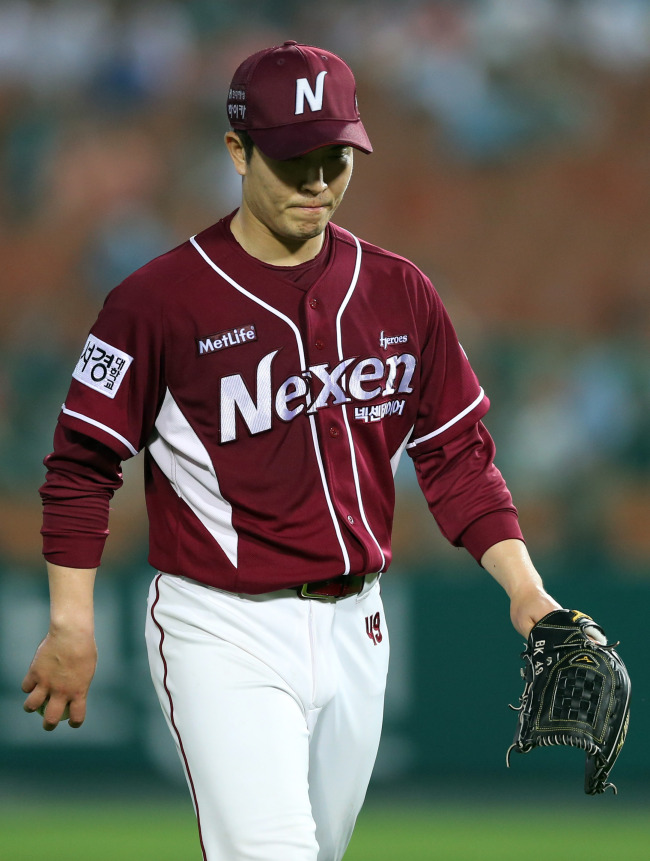 Nexon Heroes pitcher Kim Byung-hyun steps down during a game against the Lotte Giants on Wednesday. (Yonhap News)

Nexen Heroes pitcher Kim Byung-hyun on Thursday denied allegations that he intentionally threw the ball at an umpire during a game.

“I just answered ‘yes’ to an umpire telling me he was ejecting me from the game, but I did not admit to throwing the ball at him,” Kim said via team officials. “Aiming and throwing a ball at an umpire is something that just cannot happen.”

During the fourth inning of Wednesday’s game against the Lotte Giants, Kim was taken out with the score tied at 3-3. As he walked toward his dugout, he chucked the ball in the direction of the opponent’s dugout where umpire Moon Seung-hoon was standing nearby.

Moon immediately ejected him and told the player that flinging the ball toward an umpire results in ejection, to which Kim answered, “Yes.”

The officials from the Korea Baseball Organization said that Kim will attend a disciplinary committee slated for Friday. If the committee rules that Kim intended to harm Moon, he can be suspended for up to 30 games.

The incident was the latest in a series of troubles that have tainted Kim’s career.

The 34-year-old pitcher, whose 15-year professional career spans over the U.S., Japan, and Korea, is well known for his sneaky sidearm and underarm pitches along with his brash behavior.

Dubbed “Nuclear Submarine” by Korean fans, his diverse pitching skills earned him career honors such as a Major League championship ring and an MLB all-star selection, but his occasional outbursts have also earned him a reputation as a troublemaker.

During his tenure at the Boston Red Sox, he gave the home fans the middle finger when they booed him. He later apologized for the incident.