“The original plan was to create a show that would have no language, cultural, age or gender barriers,” said playwright and director Choi Yun-yeop. “The show is a nonverbal musical and I consider the story a 21st-century telling of ‘Romeo and Juliet’ that can be enjoyed by anyone from any nation.” 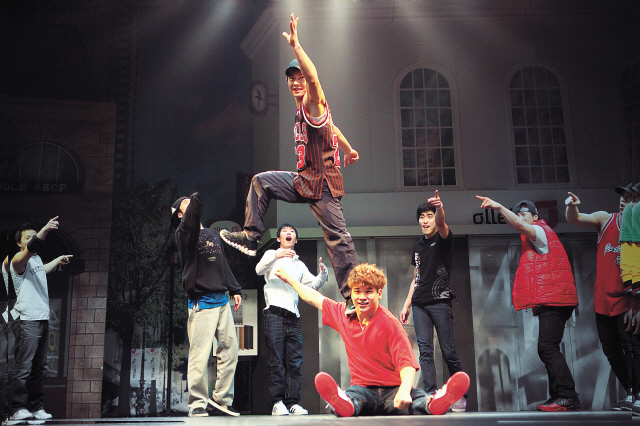 A scene from the live b-boy performance show “Ballerina Who Loved a B-Boy” (Show Bboy)
The musical tells the story of a young ballerina who falls head over heels in love with a street dancer. A hip-hop square is formed at the vicinity of a ballet training area, where classically trained ballet dancer So-yeon is constantly interrupted during her practices by the loud noise of hip-hop music. Annoyed by the constant disruptions, ballerina So-yeon chooses to confront them and complain about the loud music.

During the confrontation, a battle of the dances ensues between the ballerina and the street dancers. However, much to So-yeon’s surprise, she finds herself falling for Seok-yoon, one of the b-boy dancers, and ends up enthralled by the newly discovered world of hip-hop and break dancing. So-yeon eventually becomes a b-girl herself in the hope of winning Seok-yoon’s heart.

“The story speaks about love through music and dance,” said Choi. “Hip-hop is an art form just like ballet. This is one of the messages that I wanted to communicate through this musical.”

Computer-generated image of the newly established “Ballerina Who Loved a B-Boy” theater in Beijing, China (Show Bboy)
The upbeat and youthful performance features energetic, high-flying break-dancing scenes where dance crews come out on the stage and battle it out with one another. Since its debut, the crew has made its way around the world, touring in Singapore, Japan, China, Guam, Colombia and the United Kingdom and has even held 50 special performances at the 37 Arts Theater off-Broadway in New York City.

Encouraged by the enthusiastic response overseas, the show’s production company Show Bboy last year opened a private 700-seat b-boy theater in Beijing, China, in partnership with the Sooyeon Media Corporation and is currently negotiating to stage daily shows in the theater soon.

Since performing five shows in Shanghai in 2008, the dance crew of “Ballerina Who Loved a B-Boy” has been in and out of the country, receiving invitations to hold various special performances including performing as the opening act of the 2nd China International Copyright Expo a year later.

“We are receiving requests for our show, not just in China, but also from the U.S., Canada, Australia ... all over the world,” said Choi. “We are also currently in the beginning stages of producing a movie version of the show, both in Korean and in English. We want to give people who don’t have the chance to watch the live show an opportunity to experience the story.”

The live musical has been viewed by more than 2 million people and was selected by the 2007 Edinburgh Fringe Festival as the top performance among roughly 2,050 entries.

“Ballerina Who Loved a B-Boy” is staged every day, year-round in Seoul at the Kyunghyang Art Hill center in Jung-gu. The show runs 90 minutes. Ticket prices range from 50,000 won to 70,000 won.