[ The Korea Herald – Send E-mail ]
[Voice] Should Korea introduce substitute holidays?
With workers losing out on public days off ...
By Korea Herald
Published : Jun 10, 2013 - 20:25
Updated : Jun 10, 2013 - 20:25
Do Korea’s workers deserve more holidays? The Park Geun-hye government, having pledged at its inception to prioritize the happiness of the people, seems to think so.

Along with a raft of other proposals floated by Park with the ostensible aim of improving people’s quality of life, the administration wants to provide an extra day off to workers for every public holiday that falls on a weekend.

On paper, Korean workers, with 14 public holidays each year, enjoy more opportunities to unwind than the employees of many other countries. But, unlike in China and other countries with fewer national holidays, employees here miss out on those that fall on weekends, depending on the year.

Coupled with that, Korea has the longest work hours in the Organization of Economic Cooperation Development, and the average worker takes just 40 percent of their allotted vacation time. 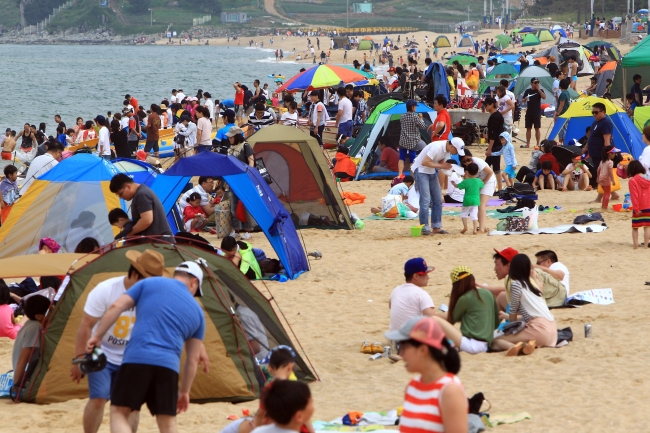 Proponents of the substitute holiday system claim it would have economic and quality-of-life benefits. Not only would it give an overworked populace more time for leisure and family, they say, it would also give a shot in the arm to the local economy.

“In general, the nation’s demand for travel and leisure activities and consumption of products and services on holidays is higher than on weekdays. For example, in a big scale mart, the total sales vary by between 6 percent and 10 percent depending upon the holiday,” said Lee Sung-tae, a researcher at the Korea Culture and Tourism Institute. “Now, the reason for the economic recession in Korea is insufficient consumption. Hence, economic policies should focus on boosting consumption; in other words, economic recovery is possible by creating effective demand through the holiday policy and circulating capital.”

Such an approach has worked to boost economic activity in other countries before, he said.

“France and the U.S. could overcome the Great Depression in the 1930s through the holiday policy, and also Japan and China boosted the economy by promoting the holiday expansion policy, such as Golden Week and Happy Sunday, respectively. The … boost effect of the holiday policy is widely recognized in economic circles.”

Businesses, however, argue to the contrary. They claim the system would place them under unreasonable financial strain. The Korea Employer’s Federation, one of the biggest business lobby groups, has estimated that the government’s plans would cost local businesses more than 32 trillion won ($28.5 billion) each year in lost productivity and increased labor costs. Representatives for small businesses have also voiced concerns.

“South Korea is the only nation among OECD members implementing paid holidays, which means that additional holidays will raise labor costs by a relatively large amount,” said Choi Hee-ju, the head of human resources policy at the Korea Federation of Small and Medium Business.

“Permanent workers get equally paid even if holiday days increase. However, temporary workers who get paid by the hour will be paid less if they take days off more frequently.”

She pointed to a survey by the Korea Employer’s Federation in 2011 which showed considerable resistance to the substitute holiday policy among employees themselves.

“Almost 60 percent of people predict that substitute holidays will see self-employed people paid less. Since it is common for them to work even on holidays, they oppose the implementation of the new system. More than 85 percent of the ‘vulnerable social group’ including day workers or self-employed people opposed the new system,” she said, noting that an anticipated decrease in income was cited as the biggest reason for the opposition.

The true public sentiment on the issue remains disputed, with various surveys showing different attitudes. Lee from Korea Culture and Tourism Institute said that the selective use of narrow surveys underplayed the extent of public support for the policy.

“Only the survey conducted for taxi drivers by the Korea Employer’s Federation showed slightly higher opposition to the holiday policy. But, limiting the survey to taxi drivers is certainly an inappropriate sample selection,” he said. “In a survey conducted on 1,000 citizens by the Korea Culture and Tourism Institute, Hyundai Economy Institute and other institutions, agreement with the holiday policy was at the 80-95 percent level.”

Despite the vigorous debate generated around the issue, some observers say the impact of the measure, which would only add a couple of extra days off each year, would in reality be limited.

“The small supplementary holiday may not affect the capital-labor ratio, and the production system of each firm,” said Rhee Keun-hee, a senior researcher at the Korea Productivity Center. “For this reason output may not be affected by the additional, small increase of holidays... and it may be affected by another economic situation in a general sense. Therefore I think the supplementary holiday may not practically impact labor productivity at present.”

Rhee pointed out that the introduction of the five-day work week in 2004 was subject to similar public debate about labor costs and productivity, but workers and businesses had adjusted accordingly.

“Now the system has been established in Korean society, and we can guess that employers and labor have adjusted efficiently in terms of productivity, labor cost, choice between work and leisure, job satisfaction and job commitment, etc.,” he said.

Rhee added that the issue of Korea’s notoriously long work hours, rather than public holidays, was more deserving of attention.

“Generally speaking, the number of holidays in Korea is not less than any other advanced countries, but the total working hours per worker is higher than other countries. More importantly, we should take interest in the relationship between working hours and wages, and we should consider how to improve labor productivity under shorter working hours.”

I’m going to make an unlikely comparison in saying that the debate over substitute holidays in Korea is similar to the debate over background checks for firearms in the United States.

The quintessential point of any evolved democratic nation is that elected officials should act on the will of the constituencies that they were chosen to represent. In the case of Korea, over 90 percent favor substitute holidays ― something that has yet to manifest itself in the policymaking of officials in Korea due to rampant misinformation by the conglomerates that run the show.

I’m looking at you, Samsung. Companies like Samsung may lose out on an extra day of labor that they may otherwise have been entitled to ― but any day off (or 10) probably couldn’t make up for the exorbitant amounts of overtime that are largely overlooked and largely unpaid by these corporations.

In siding with chaebol, the government also sends the wrong message to small businesses and restaurant owners. Anyone with any common sense can see that an extra day off from work gives people more time to go shopping, travel and eat out ― spending that helps those mom ’n’ pop shops struggling in the face of an economic downturn.

In the United States, there is a policy called “substitute holidays,” also known as long weekends. The policy refers to a system where workers are allowed to have a day off during the week when a public holiday falls on a weekend. This policy is also being considered for Korea. The policy was suggested by the Korean government in April. It was proposed to increase work productivity and to create jobs. On the contrary, it is my perspective that the policy will bring about a number of problems such as a decrease in workers’ productivity and the aggravation of the burden of the holiday labor allowance.

The decline in work productivity would be the most crucial issue. Since July 2004, Korea has had a five-day workweek. This system was designated to motivate workers to work harder, but the system rather aroused the problem of a drop in workers’ productivity, which led to economic losses for a large number of companies.

And the problems did not end there. The economic losses of companies led to a deterioration of the state economy. From this case, it can be concluded that introducing substitute holidays will create more problems than (maintaining) the five-day workweek.

In addition, the policy is highly likely to worsen the burden of holiday labor allowance. It was found that the policy will impose a financial burden of about 32 trillion won. To illustrate, if the policy is introduced, companies will have to pay workers who work on weekends a holiday labor allowance although the workers have a day off during the week. Additionally, the increase in average wages is another opportunity cost of the policy. Taking these issues into consideration, introducing substitute holidays is not welcome in Korea.

One of the most significant issues all over the world is a low fertility rate. The total fertility rate among OECD nations has been declining over the past few decades. South Korea’s fertility rate reached 1.23 children per woman in 2010, the lowest figure among OECD member countries. It seems inevitable to face a drop in the fertility rate due to high education costs and female employment, etc.

It is by no means frequent to see newborn babies. Unfortunately, there have been disgraceful incidents in the nation. A few months ago, there was a child abuse case in Busan. Moreover, child-related crime is increasing, such as sexual violence and kidnapping.

Also, according to an article in The Korea Herald, graying Japan is complaining about the noise of children. In Tokyo last year a neighborhood family sued a day care center, demanding the facility stop emitting noise and pay 17.46 million yen ($172,000) in damages for their mental suffering. These severe social problems have to be tackled as soon as possible.

Children are our future. We have to teach them well and let them lead the way, and show them all the beauty they possess inside. It must be a care-free society, and children’s futures should be bright and cheerful.