In a statement, the financial services firm said its personnel recommendation committee singled out four out of 11 initial candidates earlier in the day.

“The committee is considering nominating the final candidate before next week after it conducts another round of interviews with the four figures this Wednesday,” said KB Financial. 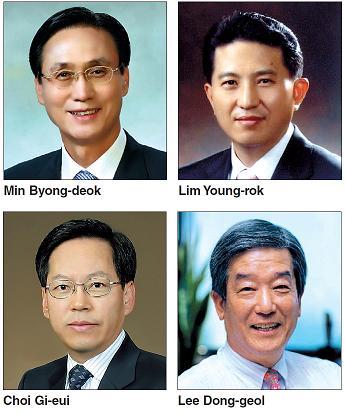 Lim, who has been working for the financial group for three years, was a high-profile civil servant. During the Roh Moo-hyun administration, he served for the Finance Ministry as the second vice minister.

The 58-year-old candidate also worked as a director general in charge of commerce at the Foreign Affairs Ministry.

While unionized workers of KB Financial have called for the personnel committee to rule out figures from financial authorities, the nation’s chief financial regulator Shin Je-yoon recently said that a civil servant could work as the chief of a private financial firm as long as he or she had expertise.

KB’s bank unit CEO Min has been working for the group for 32 years across core departments such as consumer, corporate and private banking.

Min has been regarded as the leader, who pushed forward three sectors ― corporate financing, investment banking and foreign exchange ― for fresh growth engines of KB Kookmin Bank. He had stressed that the sectors would guarantee results over the next 10 years.

Incumbent chairman Euh appointed Lim and Min to their current posts in July 2010.

He has been evaluated as the figure who carries out business policies on the basis of mid- and long-term goals, as he is reportedly wary of impractical goals.

Lee, the only non-KB candidate, was also a close economic confidant of President Park Geun-hye during her presidential race last year.

Chairman Euh said in April that he would not seek a second term after his tenure expired in July. Euh, who has held the post since July 2010, has been under continued pressure to step down under the Park administration.