Last week, Vice Minister of Trade, Industry and Energy Han Jin-hyun said that the government and the ruling Saenuri Party will ensure that compensation promised by the Korea Electric Power Corporation is paid.

The Ministry of Strategy and Finance, however, has taken the position that the compensation should be funded by KEPCO, as those for other energy-related projects are funded by the party carrying out the project. 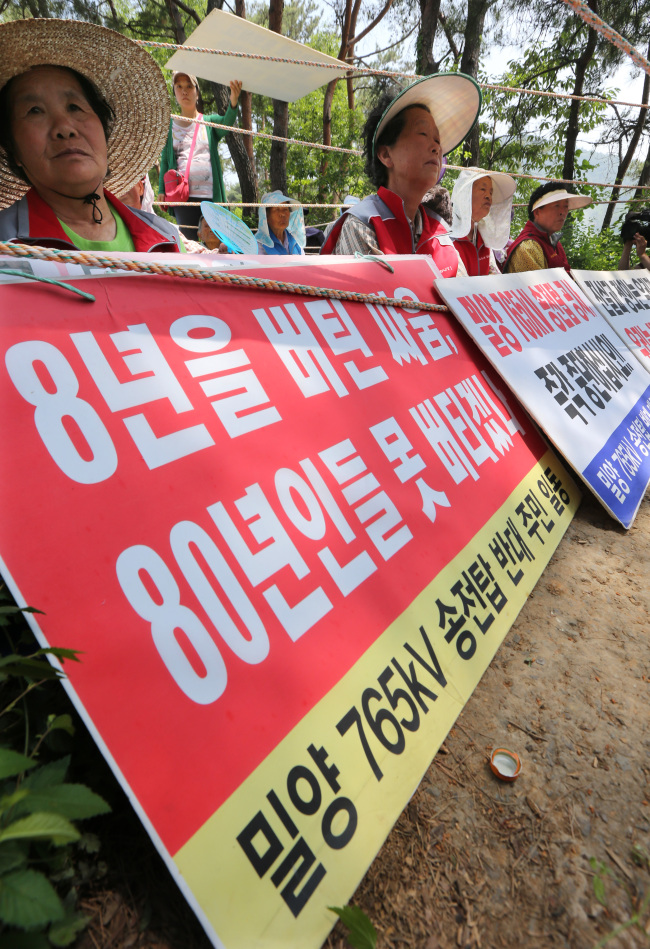 Residents stage a sit-in against the construction of high-voltage transmission towers in Miryang, South Gyeongsang Province, Friday. (Yonhap News)
The political parties’ efforts to mediate in the situation have also failed to produce significant results.

Although Rep. Cho Kyoung-tae of the main opposition Democratic Party announced last week that a panel of nine experts will be formed to review alternatives, the government and KEPCO say that an agreement on the panel has not been reached.

Residents of the area have called for construction to halt as a prerequisite for forming the panel, which will review possible alternatives to transmission towers for a maximum of 45 days.

The condition has been refused by the government, while KEPCO has questioned the efficacy of the panel, saying it will only cause delays.

The project was approved by the government in November 2007 to link the Shin-Kori nuclear power plant in Ulsan to a substation in Changnyeong, South Gyeongsang Province, through a 765-kilovolt transmission line across 90.5 kilometers with 161 towers.

Of the 161 towers, 109 have been completed while consturction on 52 towers in the Miryang area has been delayed due to residents’ opposition.

The residents have been protesting since May 20, when work resumed after eight months, and clashes between residents and authorities have so far resulted in 17 casualties.