“We plan to simplify business licensing procedures, which would shorten the period between foreign firms’ application for opening branches and regulators’ endorsement,” said Financial Supervisory Service Gov. Choi Soo-hyun during an interview with The Korea Herald last week. He took office in March as the first FSS governor under the Park Geun-hye administration.

Over the past few years, some foreign capital had to go through complicated or longer-than-expected procedures in garnering regulatory approval when they apply to open branches or liaison offices.

He also reiterated that Seoul would ease the burden of uncertainty over the following sanctions “by streamlining the procedures from probes to final actions” involving taking disciplinary measures.

It sometimes used to take more than half a year to finalize the sanction level after inspectors completed their investigation.

Choi, however, made it clear that the coming administrative benefits did not mean tolerance of irregular practices conducted by foreign players.

While the authorities aim to create a better foreign investment climate, stern measures against rule-violators hampering free and fair competition are also necessary, he said. 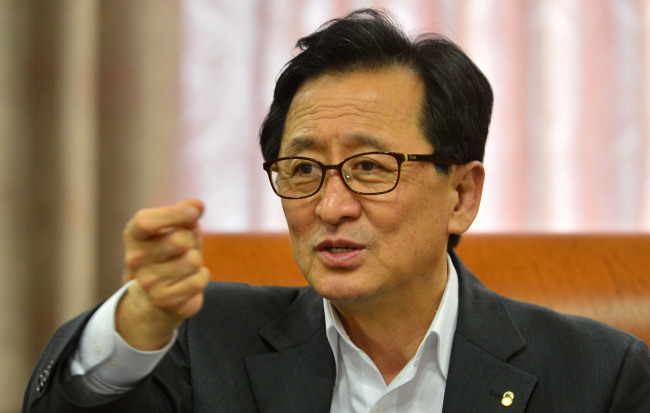 Financial Supervisory Service Gov. Choi Soo-hyun (Lee Sang-sub/The Korea Herald)
Downplaying popular criticism that sanctions merely exist for the sake of handing down sanctions as a supervisor, he stressed that “sanctions hold significance in terms of paving the way for the other market participants to carry out free and fair competition.”

Choi has been picked as one of the few senior officials who prioritize active communication and interchanges with foreign chef executives.

As some regional CEOs of foreign financial firms operating here expressed worries over possible tough stance before President Park’s inauguration, he placated them last February in his term as the first senior deputy governor of the FSS.

“I’ve assured them the nation’s policies toward foreign capital would not be different from the past administration,” he said. “Our basic stance is to continuously foster a level playing field between domestic and foreign capital.”

For enhanced communication, the top regulator said he would hold a periodical “meeting with foreign CEOs twice a year.”

Their first meeting slated for May 28 at “FSS Speaks 2013,” an event designed to provide foreign firms with a prime opportunity to better understand Korea’s regulatory policies and share their views on pending industry issues.

The FSS has also introduced the “prior consultation” system in an attempt to sufficiently reflect their viewpoint when the authorities push forward new legislations or revision of the rules.

“Prior notification on revised laws was formerly insufficient,” he said. “Our staffers will also be instructed to be more active in communicating with non-Korean industries.”

In the 2012 WEF evaluation, Korea ranked 71st among 144 countries in the segment of financial market development, while the nation’s sovereign competitiveness and non-financial industry sector grabbed 19th and 22nd, respectively.

The top regulator also commented on the updated authority to crack down on unfair trading. Korea’s securities regulators are entitled to investigate alleged stock manipulation cases with “special criminal authority.”

Benchmarking the Securities and Exchange Commission of the U.S. and the Financial Conduct Authority of the U.K., the Korean government recently granted criminal authority to FSS and Financial Services Commission investigators monitoring the brokerage industry.

Choi also initiated the consumer-initiated inquiries, which took effect on May 27, under which financial consumers are entitled to request the FSS to conduct probes into financial firms.

Born in 1955 in Yesan, South Chungcheong Province, Choi had worked for the Finance Ministry as a senior civil servant, for Washington-based World Bank as a senior director and for the Korea Financial Intelligence Unit, an executive arm of the FSC, as its chief.