Microsoft Corp. on Tuesday launched its own tablet computer Surface in South Korea in a bid to bolster its presence in the market dominated by rival gadgets manufactured by Apple Inc. and Samsung Electronics Co.

The U.S. software giant said consumers will be able to buy the Surface RT tablet computer and its upgraded version, the Surface Pro, at local retail shops starting from June 11.

The tablet computer has been already released in over 20 countries, including the United States and China. 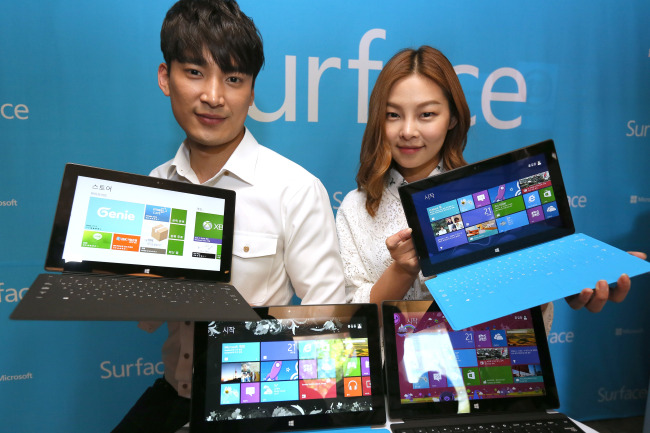 The Surface Pro tablet with the same screen size, operates on Windows 8 which is for devices using processors from Intel Corp., the company said.

The Surface Pro features the Surface Pen, a stylus that enables users to doodle and write on the screen as they do on paper.

The Pro comes with an Intel Core i5 processor, a full-sized USB port and weighs 903 grams with a thickness of 13.5 millimeters.

Also, eyes are keen on whether Microsoft will be able to take on rivals in the Korean tablet PC market led by the Galaxy Note series by Samsung Electronics, the iPad Mini by Apple and the Nexus 7 by Google. (Yonhap News)