That fact was not lost on Colombian and Korean negotiators when they inked a free trade agreement in February.

Welcome news for the energy-thirsty, trillion-dollar East Asian economy. Korea is the seventh-largest importer of crude in the world at 2.5 million barrels a day.

“SK is in the final stages of negotiations to get a contract to build a $3.2 billion oil refinery,” said Colombian Ambassador to Korea Jaime Alberto Cabal in an interview with The Korea Herald at his office in downtown Seoul on May 8.

“Colombia is poised to begin exporting oil to Korea. We are in the process of negotiating an offer for Korea to import oil from us.” 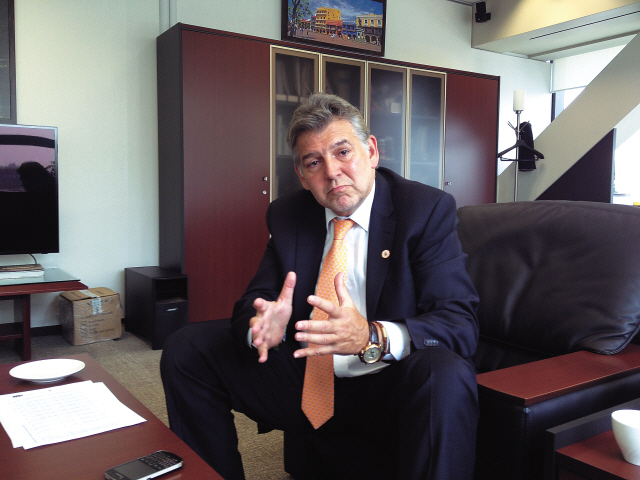 mbian Ambassador to Korea Jaime Alberto Cabal gestures during an interview with The Korea Herald at his office in Seoul on May 8, just two weeks before ratification of the Korea-Colombia Free Trade Agreement pact is addressed in his country’s National Assembly. (Philip Iglauer/The Korea Herald)
Prospects for exporting crude to Korea emerged as Colombia became a major oil producer in the 2000s. That energy relationship has been developing in earnest over the past four years.

In 2009, Colombian and Korean energy firms bought a Peru-based oil company marking the beginning of cooperation on energy issues between the two countries.

In 2011, Korean firms, including state-operated Korea National Oil Corporation inked a joint project worth up to $10 billion in which the two countries will develop new oil fields in Colombia’s eastern Llanos grasslands, along with a pipeline to Colombia’s western coast for shipments to South Korea.

With ratification of the Korea-Colombian trade pact, Trade Ministry Deputy Director Cho Sung-in said he expects energy cooperation to get a boost.

The FTA has specific provisions facilitating cooperation on minerals and energy.

The FTA will also increase knowledge sharing and exchange, which will help Korean companies stay informed of policy changes and new regulations, he said.

Korea still imports a relatively small amount of oil from Colombia, just $70 million worth in 2012.

The quantity of crude sent to Korea could increase massively, however, upon completion of the multibillion-dollar infrastructure investments in refineries, fuel storage facilities and the pipeline to the Pacific Ocean.

President Juan Manuel Santos is expected to present the trade pact signed in February for Colombian National Assembly’s ratification. Colombia is also expected to meet Pacific Alliance partners Mexico, Peru and Chile on May 23 to discuss how to upgrade commercial links with East Asian countries such as Korea.

Although a specific date has yet to be set here, Deputy Director Kim Mi-song at Trade Ministry said she expects the National Assembly to take up ratification of the trade pact by the end of July.

Also this month, the four Pacific Alliance countries organized a joint promotional event for May 30 to strengthen trade and commercial links with Korea by focusing on “specific and concrete projects,” Cabal said.

Colombia and Korea established diplomatic relations for the first time in 1962 and the South American nation sent soldiers in support of South Korea against invading North Korean and Chinese armies.

Colombia is the only South American country that participated in fighting during the Korean War. Some 5,100 soldiers and sailors were sent during the three-year conflict, in which 214 were killed in battle and 448 were injured.

Military cooperation has continued. Korea has exported $62 million in military equipment to Colombia including strategic weapons systems and sophisticated communications technology, according to diplomatic sources.

People-to-people exchanges are on the up, too.

From 2010 to 2012, the number of Korean travelers to Colombia increased by 25 percent annually, Cabal said. “Over 7, 000 Colombians visited Korea in 2012 as well. This is in line with Colombian visits to Japan and China over the same period.”