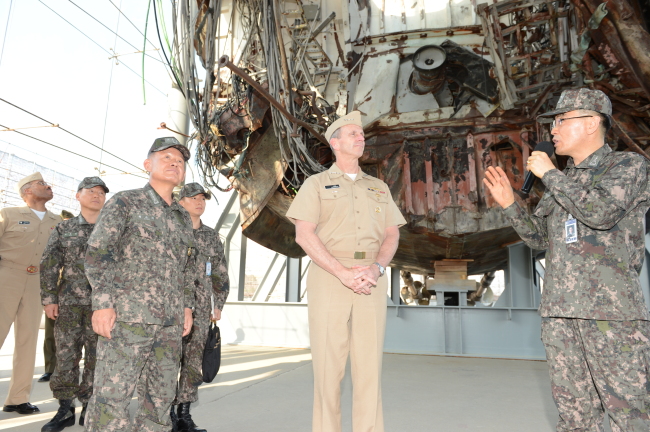 On Thursday, the first day of his two-day schedule, Greenert visited the South Korean Navy’s Second Fleet in Pyeongtaek, Gyeonggi Province, to pay his respects to the 46 fallen sailors of the corvette Cheonan.

The wreckage of the 1,200-ton vessel is on display at the naval base. The North torpedoed it near the western inter-Korean sea border in March 2010.

During their talks at the fleet command, Greenert and South Korea’s CNO Adm. Choi Yoon-hee shared the view that Pyongyang posed a serious threat to peninsular security with its nuclear and missile developments.

The two naval chiefs also recognized the need for stepped-up bilateral cooperation in increasing anti-submarine capabilities and the sharing of information on the North’s ballistic missile movements by capitalizing on naval intelligence assets such as Aegis-equipped destroyers, officials said.

On Friday, Greenert visited the Combined Forces Command in Seoul and the Command Fleet Activities Chinhae to encourage U.S. troops in Korea. Greenert became the 30th CNO on Sep. 23, 2011.