Presidential Chief of Staff Huh Tae-yeol apologized to the nation for the “embarrassing, unsavory” incident, for which the main opposition Democratic United Party demanded all senior presidential secretaries bow out.

The apology came a day after Yoon denied all allegations against him, claiming “cultural misunderstandings” have prompted the scandal that overshadowed the outcome of President Park Geun-hye’s first visit to the U.S. as head of state last week. 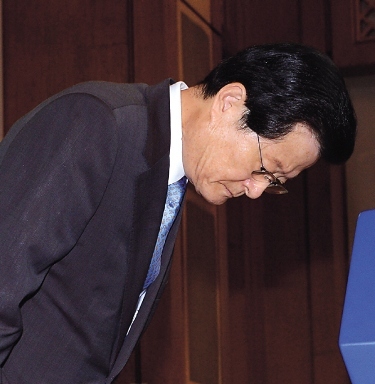 Chief of Staff Huh Tae-yeol (Chung Hee-cho/The Korea Herald)
“Anybody related to the incident, including myself, would never shirk his or her responsibility should he or she have to shoulder it,” Huh told a press conference at Cheong Wa Dae.

“I apologize to the nation. I also deliver words of deep apology to the victim herself, her family and relatives, and overseas Koreans. Apart from legal issues, this is an unacceptable and very shameful incident.”

Huh stressed Cheong Wa Dae would take this incident as an “invaluable opportunity” to establish discipline in the presidential office.

Arguing a slew of news reports were based on “unfounded rumors,” Yoon denied all allegations Saturday. The 56-year-old former journalist is suspected of groping a 21-year-old Korean-American intern who assisted him while he was accompanying Park in Washington.

Washington police have launched an investigation after a sexual misdeed claim was filed against him Wednesday. A preliminary police report alleged the suspect “grabbed her buttocks without her permission” between 9:30 p.m. and 10 p.m. on Tuesday.

“She (the intern) guided me around in a very clumsy, half-hearted manner, for which I scolded her, perhaps too much. Later, to console her, I had some drinks at a basement hotel bar not only with her, but also with the driver,” Yoon told reporters in an impromptu press conference.

“With the driver looking at us, how could I sexually assault her? I just patted her waist, saying I hope she can be successful in the States. It appears to be a cultural misunderstanding, and I had no sexual intention whatsoever toward her.”

A Korean Embassy official in Washington said the driver was at the bar with Yoon and the victim, but it was hard to confirm whether the driver witnessed everything that happened at the bar that night.

“From time to time, the driver might have stepped out of the bar and came back. But I understand the driver did not say he had witnessed the very moment of alleged sexual assault,” the anonymous official said.

Yoon also repudiated the rumors that he hurriedly flew back to Seoul to avoid a police investigation, claiming Lee Nam-ki asked him to return home.

Lee immediately countered the claim as he struggled to contain the scandal that dealt a fresh blow to President Park Geun-hye who has repeatedly been upbraided for flip-flops over senior personnel appointments.

“I was shocked at the allegations of sexual abuse at the time and busy as the time was approaching for the president’s speech at the U.S. parliament,” Lee told reporters Saturday. “I can’t recall (what happened at the time) 100 percent, but I did not say that it was right for him to return (to Seoul).” 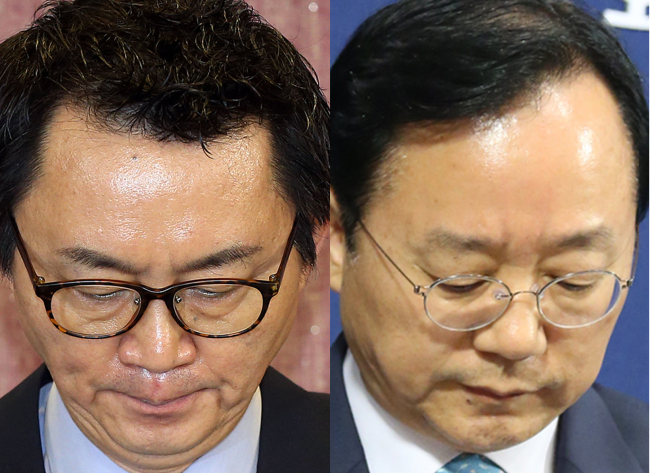 Former presidential spokesperson, Yoon Chang-jung (left) and senior secretary for public relations, Lee Nam-ki (right)(Yonhap News)
Yoon claimed that although he wanted to stay in Washington to explain his position, Lee urged him to return home, saying whatever excuse Yoon would make, it would not be acceptable.

The presidential office noted even if Lee had asked Yoon to return to Seoul, it would not cause any legal problems both in Korea and the U.S., saying it would request the U.S. authorities speed up the probe to ascertain the truth as soon as possible.

The DUP stepped up its offensive against Cheong Wa Dae, calling on all senior presidential secretaries to step down en masse and demanding a full-scale reorganization of the presidential office.

It also demanded President Park’s official apology for the scandal, saying a parliamentary hearing should be held to look into the case.

Criticizing Yoon for making excuses to defend himself during his press conference, the ruling Saenuri Party urged him to conscientiously respond to all future investigations to get to the bottom of the scandal.

Meanwhile, Foreign Minister Yun Byung-se said there would be no need to worry about any diplomatic ramifications stemming from the scandal.

“The Washington government has already said that the scandal has nothing to do with the outcome of President Park’s visit to the U.S. You don’t need to worry about it at all,” he said while appearing on a KBS TV program.