The Nimitz Strike Group includes 64 aircraft as well as cruisers and destroyers, said the group’s commander, Rear Admiral Mike S. White, after the aircraft carrier anchored off the southern port of Busan.

“I believe it’s critically important that we maintain our inter-operability with our partners like the Republic of Korea (South Korea),” White told journalists.

He said the USS Nimitz was “on a scheduled deployment” to the Asian region.

“Any time we’re in the region, we try to take advantage of opportunities to train with our partners. So this is not a response to any particular event but part of our continuous engagement, much like we shared for 60 years.” 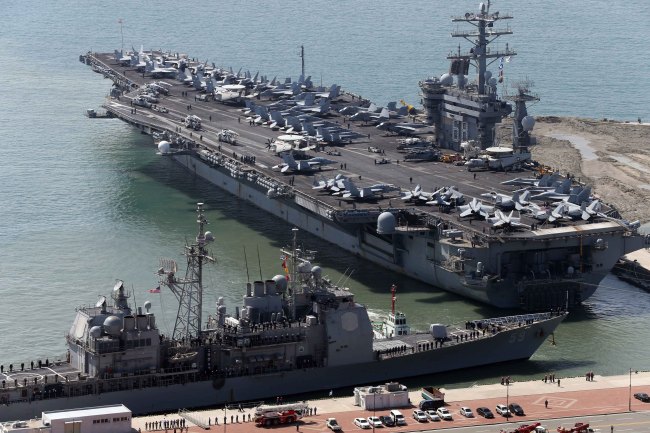 The aircraft carrier USS Nimitz is anchored off a naval port in Busan on Saturday. (Yonhap News)
The 97,000-ton Nimitz, one of the world’s largest warships, will participate in joint search-and-rescue operations as well as “sea manoeuvring” around the Korean Peninsula, the South’s Defense Ministry said.

The ministry declined to confirm news reports that the drills would be staged in the coming week along the southern and eastern coasts following an ongoing anti-submarine exercise in the Yellow Sea.

Military tensions on the Korean Peninsula have been high for months, with the North issuing a series of apocalyptic threats over what it sees as intensely provocative U.S.-South Korean joint exercises.

The friction has somewhat abated in the past week after the annual ground exercises were wrapped up at the end of April, and a U.S. defense official said North Korea had moved two medium-range missiles off their launch pads.

North Korean troops near the disputed Yellow Sea border have been ordered to strike back if “even a single shell drops” in their territorial waters, the North’s army command said in a statement on Tuesday.

Any subsequent counterstrike would trigger an escalated military reaction that would see South Korea’s border islands engulfed in a “sea of flames,” it said.

North Korea shelled one of the islands, Yeonpyeong, in November 2010, killing four South Koreans and sparking brief fears of a full-scale conflict.