It pays to be patient when the erratic right-hander is on the mound.

Marmol walked two guys and hit another batter before he was pulled, and Cincinnati scored four times to rally for a 6-4 victory over the Chicago Cubs on Saturday.

“You’ve got to take what they’re giving you, and Marmol had a little tough time out there,” Reds manager Dusty Baker said. “Our guys stayed off some close pitches and were fortunate enough to get the hit when we needed it. But also did a good job of keeping the ball off the ground when we had the bases loaded.” 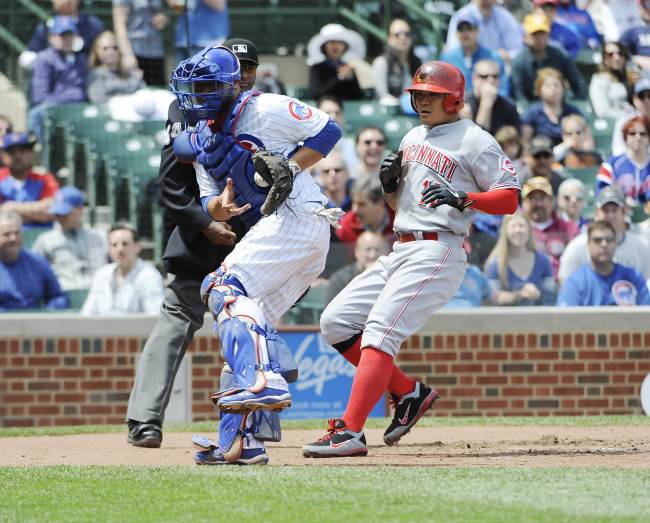 Choo Shin-soo (right) of the Cincinnati Reds scores a run as Welington Castillo of the Chicago Cubs takes a late throw during the third inning at Wrigley Field in Chicago, Illinois, Saturday. (AFP-Yonhap News)
That’s right, Cincinnati had just one hit in the big eighth inning, but that was all it needed to secure its first winning road series of the season. The Reds held on for a 6-5 victory in the opener on Friday when Darwin Barney struck out with the bases loaded to end the game.

Alfonso Soriano hit a pair of two-run homers for the Cubs, who have lost four of five. But Soriano’s 31st career multihomer game had an all-too-familiar end for the veteran slugger.

“We have so many games where we’re winning in the sixth, seventh inning and we give it to the other team,” Soriano said. “I think that’s the difference. ... A game like this we can’t give it away.”

Jeff Samardzija pitched six effective innings for Chicago after Choo Shin-soo homered on the first pitch of the game, and James Russell got three outs before Marmol entered with a 4-2 lead. It was Marmol’s 453rd relief appearance with the Cubs, snapping a tie with Lee Smith for the franchise record.

He marked the occasion by walking Zack Cozart on four pitches, walking Joey Votto on a full count and hitting Brandon Phillips to load the bases with no outs. That was enough for manager Dale Sveum, who replaced Marmol with Hector Rondon. The crowd of 36,455 showered Marmol (2-2) with boos as he made his way to the dugout.

“Obviously, we know the guys that are out there pitching that have been doing it for a while,” Reds right fielder Jay Bruce said. “Marmol’s tough, but he’s certainly hit or miss, and we took what they gave us and it was enough.”

Bruce hit an RBI single and Todd Frazier followed with a sacrifice fly to right, tying it at 4. After Xavier Paul was walked intentionally, pinch-hitter Jack Hannahan walked to force home a run and Devin Mesoraco, another pinch hitter, sent another fly ball into right field to give the Reds a 6-4 lead.

“Nice team effort,” Frazier said. “Got nine guys up that inning and we manufactured runs. It wasn’t a big one there.”

Logan Ondrusek (2-0) worked the seventh, Jonathan Broxton pitched the eighth and Aroldis Chapman finished for his seventh save. Chapman worked around a one-out walk by Soriano one day after he gave up three runs in a non-save opportunity.

Marmol began the year in the closer’s role, but was demoted after he blew a save opportunity at Atlanta on April 6. He also was in and out of the closer’s spot last year.

He had put together 10 consecutive scoreless appearances before this bad outing.

The Cubs wasted a solid start by Samardzija, who settled down after Choo sent a drive over the left-field wall for his seventh career leadoff homer. He allowed two runs, one earned, and four hits while throwing a season-high 111 pitches.

Cozart had an RBI single in the third for Cincinnati, but Samardzija retired 11 of his final 13 batters. The right-hander is winless in six starts since he tossed eight scoreless innings in a 3-1 victory at Pittsburgh on opening day.