The Heroes climbed to first place by defeating the Samsung Lions 4-3 in 10 innings on the road in Daegu on Thursday. The victory completed a three-game sweep of the two-time defending champs.

At 16-7, the Heroes, winners of three straight, are in first place for the first time since May 25 of last year.

In 2012, the Heroes won a franchise record eight consecutive games to reach first on May 23, but stayed there for only three days, never to return again the rest of the season. 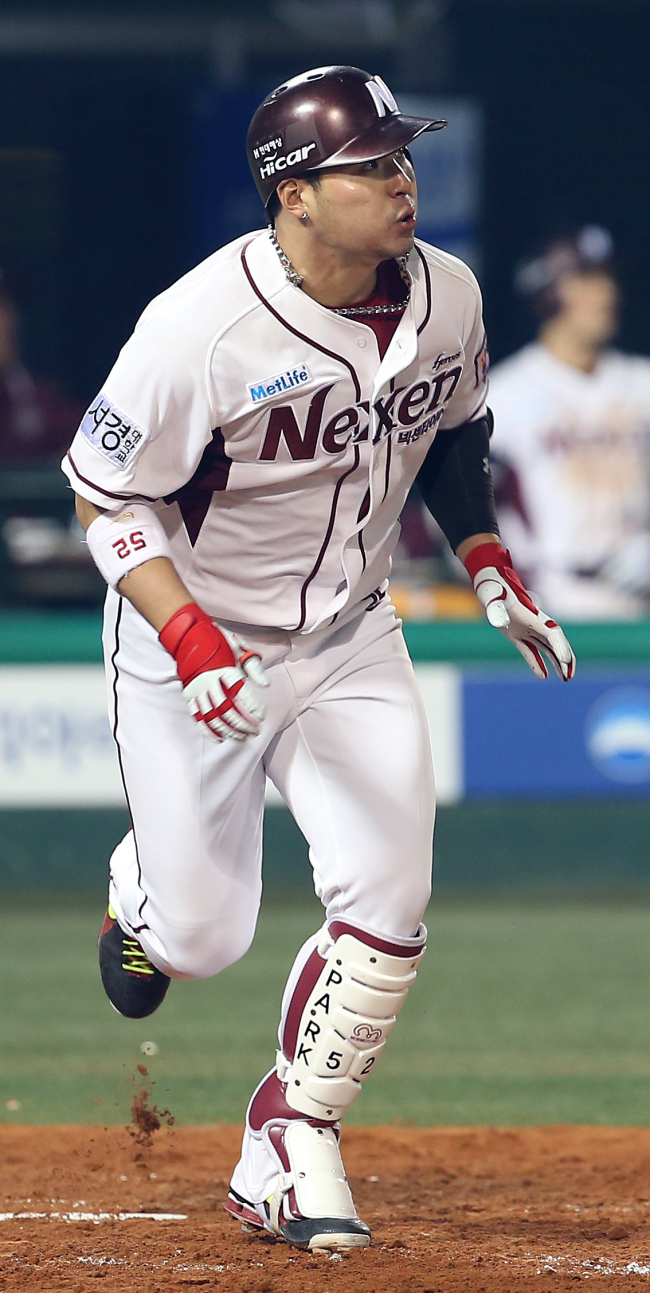 KBO’s reigning MVP Park Byung-ho (Yonhap News)
The Heroes, though, came undone in the second half last year. They were 23-19 with one tie over April and May, but went 38-50 with two ties in the ensuing five months. They entered the All-Star break in third place, but finished the season in sixth, two spots out of the playoffs.

The hot start to this season begs the question: Can the Heroes sustain this level of play for the rest of the season?

The Heroes hold a half-game lead over the Kia Tigers, whom they host for a three-game weekend series starting Friday in Seoul.

So their stay at the top may or may not last more than three days this time around. Still, some raw numbers and plenty of evidence suggest this team could be among the four playoff contestants come October.

Last year, the Heroes produced the league’s MVP in first baseman Park Byung-ho, and its Rookie of the Year in second baseman Seo Geon-chang.

These core players have been just as good this year and they’re also getting some help from their teammates.

The Heroes have hit the KBO-best 23 home runs in 23 games. Lee Sung-yeol is tied for the KBO lead with seven, and he alone has two more home runs than the entire Hanwha Eagles team. Lee, 28, has already matched his home run total from 2012.

Park, who had 31 homers and 105 RBIs to lead the KBO last season, has hit five long balls so far with a team-leading 18 RBIs.

And for the second straight year, Seo is among the KBO leaders in runs scored and steals at the top of the order. Kim Min-seong, a light-hitting infielder, leads the team with a whopping .438 batting average with runners in scoring position. (Yonhap News)