[ The Korea Herald – Send E-mail ]
[Newsmaker] ‘Little Psy’ falls victim to racist attack
By Korea Herald
Published : May 2, 2013 - 20:25
Updated : May 3, 2013 - 10:06
The police are set to launch an investigation into alleged racist online attacks aimed at Hwang Min-woo, a 7-year-old singer who shot to fame after appearing in the music video for Psy’s "Gangnam Style."

Since appearing in the video, Hwang has gained fame as “Little Psy” and has appeared in numerous events and television shows and commercials.

Buoyed by the popularity of Gangnam Style, Hwang has also launched his own career and released his first single in March.

According to reports, the police were alerted by an official at Hwang’s management company to an organized online attack against Hwang. 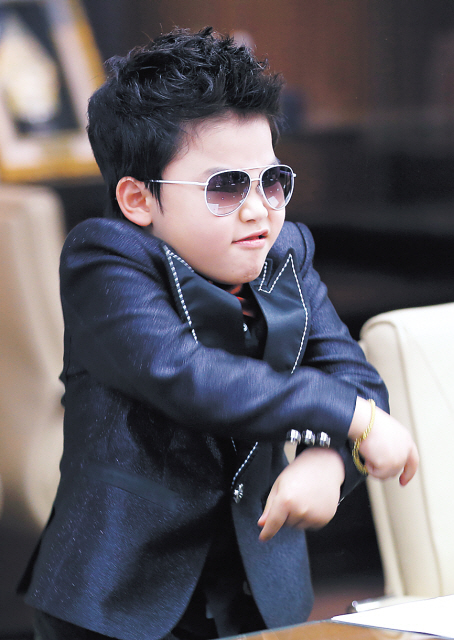 Hwang Min-woo
According to the police, more than 10 internet users who appear to be members of the website Ilgan Best (Ilbe.com) cooperated in paralyzing the homepage of Hwang’s management company on April 23.

Ilgan Best is a website focused on humor and social issues whose users are mostly conservative.

In addition, there are reported to be hundreds of derogatory comments ranging from those attacking him for his heritage and his hometown.

Hwang is reported to have been shocked by the comments and has become increasingly withdrawn since March.

His mother is originally from Vietnam, and until recently he lived in Gwangju, which is often attacked by internet users with strong rightwing tendencies due to the city’s connection with progressive parties and to misperceptions about historical events.

Although the number of multicultural families has been on the rise since the late 1990s, such families and marriage immigrants are often subjected to prejudice.

According to the Ministry of Justice, the number of marriage immigrants stood at about 145,000 at the end of 2011. Of the total, about 25.8 percent were women from Vietnam.