However, none have risen quite as high or as fast within Korean society as Rep. Jasmine Lee of the ruling Saenuri Party.

Lee, who is originally from the Philippines, became a naturalized citizen in 1998, three years after she married her late husband Lee Dong-ho. 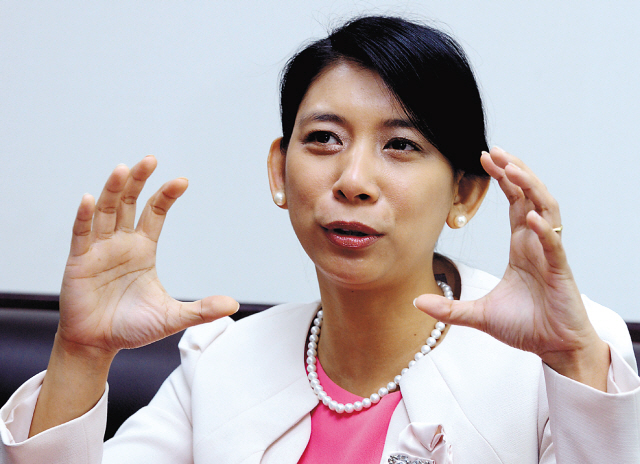 In 2011, she became the first naturalized Korean to be employed by the Seoul metropolitan government as a civil servant.

In the following year, she was voted into the National Assembly as a proportional representative of the Saenuri Party, becoming the first non-ethnic Korean to become a legislator.

Despite her varied career, however, the theme of promoting multiculturalism has been a constant for Lee in her time in Korea.

“When I was working for a nongovernmental organization, I always thought there was more I could do if I went up the ladder. I was given the chance last year, and I took it,” Lee said.

While the first-term lawmaker and other high-profile immigrants such as Korea Tourism Organization chief Lee Charm are far from the norm, Lee says that changes that indicate the rising status of foreigners in Korean society are taking place across the country.

“Me sitting right here, right now will tell you that things are changing,” she said. Lee added that the level of Korean language proficiency is a big factor in enabling expats to play bigger roles in their communities and to rise to more prominent positions in society.

While Lee says that she is only doing what she can to make the changes she has always wanted to bring about, being a legislator has changed her views in some ways.

“Before, I wanted to actually get rid of the word ‘multicultural’ because it has a negative impression on people,” she said, noting that many Koreans have preconceptions about terms such as “multicultural” and “multicultural families” as referring to Southeast Asians in underprivileged conditions in Korea.

However, Lee also says that despite its uses, the term “multicultural” is also integral to the stereotypes and preconceptions Koreans have about immigrants ― an aspect of Korea’s brand of multiculturalism that the media plays a large role in.

She pointed out that news organizations rarely highlight the lives of happy, well-functioning multicultural families, choosing instead to focus on social problems that arise from such families.

“I’ve worked in the media and I know how they affect and how big an impact it makes, because I’ve been there for seven years,” she said. She added that because of this she wanted to become a member of the parliamentary committee dealing with culture and broadcasting issues in the early days of her term. She went on to say that many Koreans’ limited experience with foreigners leads to stereotypes and biases.

Lee explained that when she poses the question “What is the first thing that comes to mind when you hear the word ‘multicultural’?” at various lectures she gives, the answer is invariably “foreigners” and “Southeast Asians married to Koreans in the provinces.”

However, she says that prejudice towards marriage immigrants in Korea seems to be related more to social status than race.

“(Koreans) are not really looking down (on Southeast Asians), but are saying, ‘We are better off than you are.’ Multiculturalism is new to Korea. So I think we have to change the perception of the people.”

In addition to the widespread prejudice against immigrants held by the public, Lee pointed out that the authorities need to coordinate multicultural policies for more efficiency, and to approach related issues from a more fundamental, long-term angle.

“No government agency is concentrating on defining multiculturalism in Korea, or at changing the negative perception that is actually growing in society,” she said. She added that current policies bring short-term measures that are like “first-aid bandages” that will soon lose their efficacy.

Such long-term efforts, Lee says, should begin by defining what multiculturalism means in Korea, and by accepting immigrants as being part of Korean society as a whole, rather than perceiving them as belonging to a separate group.

“People have to choose, to accept that we are living in one society. You can’t put aside one section of the society.”