[ The Korea Herald – Send E-mail ]
Buddhist leaders use technology to reach masses
By Korea Herald
Published : Apr 28, 2013 - 20:27
Updated : Apr 28, 2013 - 20:27
Yes, South Korea is the most wired country in the world, but the preconceived stereotypes of Buddhist monks living in ascetic, rustic conditions nevertheless do not blend well with smartphones. Yet monks are chatting and texting, and spreading Buddhist teachings, on cell phones everywhere from Dongguk University in the heart of Seoul to the sandy courtyards of mountain hermitages.

“This is not an age of happiness but an age of exhaustion and difficulty. But a single text message can give you strength,” explains Venerable Song-mook, the director of the Jogye Order of Buddhism’s Office of Missionary Affairs.

What is more surprising than the mere use of this technology is how the Jogye Order ― by far the largest Buddhist order in Korea ― has been developing cutting-edge smartphone apps to spread the message of Buddhism.

After serving aromatic cups of tea to inquisitive visitors wanting to know about monks and their use of smartphones, Ven. Song-mook pulls out his own phone from somewhere in the loose folds of his traditional gray robe. It looks like an Android.

“The fact is that children, young people and even adults are reading books less and less often these days,” he says in a calm, measured tone. “On the subway, on the bus and on the street, people are using smartphones to access information about subjects they are interested in. So we thought that perhaps we could use these devices as a way of reaching out to them.” 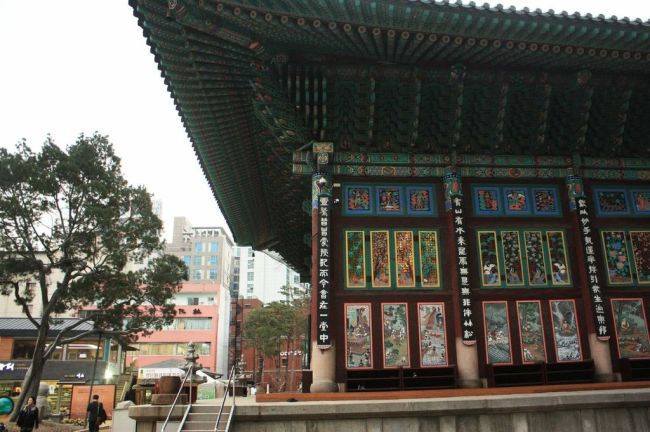 The exterior of Jogyesa Temple in downtown Seoul
Starting with the “Hello Dharma School” application in 2010, the Jogye Order’s Office of Missionary Affairs has developed eight apps and is working on several more. “Hello Dharma School” is a storybook-style app that introduces the life and teachings of the Buddha in English. Another app named “Mind Mirror 108,” which includes versions for children and young adults, is designed to teach actual Buddhist practice.

“The idea is to get rid of the idle thoughts that distract us and to realize that we are the Buddha, and also to help us cultivate compassion,” Ven. Song-mook explains. Overt religious overtones were left out of this app, which was developed in response to youth issues like school violence, depression and suicide.

Some of the other apps, such as a recording of the Heart Sutra, were made for practicing adults. The next time you hear the sound of a wood block and the chanting of a monk, it could very well be coming from the nearest smartphone. 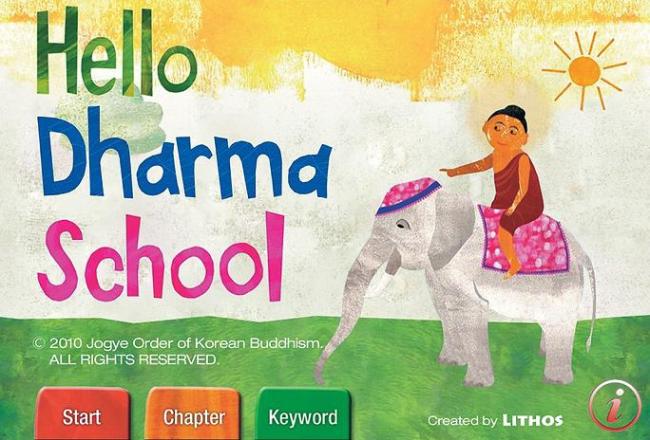 “Hello Dharma School,” a mobile application developed in 2010, reaches out to the English-speaking masses with stories of the life and teachings of Buddha. (Courtesy of Matthew Crawford)

When asked how smartphone technology can serve as an aid to spiritual practice, Ven. Song-Mook answers without hesitation:

“Whenever you’re going somewhere and you have some extra time, you could open up an app and read some of the Buddha’s teachings.” He adds that people studying Buddhist scripture can now look up difficult phrases with a few taps of their finger.

Among the Korean Buddhists embracing new technology, the most enthusiastic and successful has been the monk Hyemin. Currently residing in the U.S., Ven. Hyemin has well over 500,000 followers on his Twitter account @haeminsunim but has begun a period of electronic silence from April 1.

Ven. Song-mook believes that pursuing missionary work through social media like Ven. Hyemin has done is the wave of the future for Korean Buddhism. He sees this as the way to prepare for the “age without books” that is almost upon us.

“But would a monk sitting on a mountain somewhere meditating really know anything about smartphones?” he asks thoughtfully. In the bright office interior, decorated with thriving green plants, the only picture on the wall is of a snowy peak in Nepal.

Over 100 kilometers from Seoul at the base of Gyeryong Mountain stands the ancient Donghak Temple, one of over 1,000 associated with the Jogye Order. Here a nun named Myung-oh explains the functions of the temple’s own app, sitting at a desk next to a CCTV screen showing footage of visitors doing prostrations in the prayer halls.

In charge of supervising second year students at the temple’s school for Buddhist nuns, Ven. Myung-oh switched over to a smartphone only a year and a half ago. She shows her phone before admitting that she actually doesn’t like gadgets.

“All I need is to be able to make phone calls and send text messages,” she concedes, “so I chose an old-fashioned smartphone from the ones that were available. I don’t really make use of my smartphone that much.”

Speaking in a mix of Korean with a southeastern accent and polished English phrases, Ven. Myung-oh makes it clear that at Donghak Temple, the smartphone is a necessity for the nuns in positions of responsibility but a forbidden item for the novices:

“They get in the way of the very practice of religion,” she explains. “When the phone rings, you have to answer it, and you have to pay attention to it. Here at this monastic school, the teachers are nuns, and the students are nuns, too. They have left their home and family. They need to quit their secular life.”

Of course, when it comes to serious Zen meditation, the use of smartphones and their apps starts to seem absurd. Ven. Song-mook had mentioned that sometimes when deeply engrossed in his studies he turns off his smartphone for days at a time. And Ven. Myung-oh tells us that she finds it a relief when her phone goes out of service for a few days.

In the cool, shady interior of the temple office, Ven. Myung-oh’s calm explanation slowly begins to unpuzzle the relationship between technology and Buddhism. Ven. Song-mook wraps it up well.

“You have to let go of everything, embrace mindlessness and learn the way of emptiness. Could a smartphone really be necessary for learning this great truth?” he asks. “And of course, it’s not necessary. However, before we reach enlightenment, we are still humans, and (a smartphone) can help us learn a little more.”