Latos retired the first 10 batters and 15 of the first 16 he faced and mostly spared an overworked bullpen, and Frazier hit a long home run and the Reds beat the Chicago Cubs 1-0 Wednesday.

“This is what we wanted so bad,” Reds manager Baker said. “This sets us straight for a couple of days.”

With one out in the sixth inning of a scoreless tie, Frazier blasted a 2-1 pitch from Jeff Samardzija 480 feet to straightaway center field to increase his team-leading home run total to six. 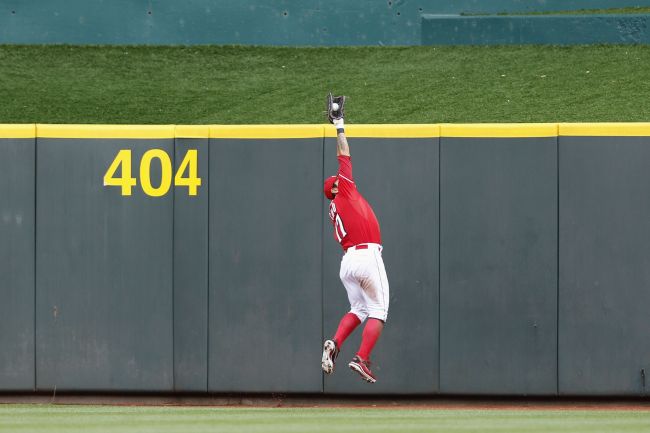 Cincinnati Reds center fielder Choo Shin-soo makes a catch against the wall on Wednesday. (AFP-Yonhap News)
The homer, which bounced high off the batter’s eye, is the longest at Great American Ball Park this season and the seventh-longest in the facility’s 11-year history.

“I was just trying to get a fastball,” said Frazier, who became the first Cincinnati player to homer in a 1-0 win since Sean Casey against St. Louis on Aug. 26, 2004. “I haven’t seen too many lately. I got one, and I took advantage of it. I took a couple of steps and figured it was out, but I didn’t know how far until I saw it hit the (batter’s eye).”

Latos (1-0), the victim of two blown saves among his first four starts this season allowed four hits and a walk with four strikeouts. He had to rely solely on his two- and four-seam fastballs, too.

NEW YORK (AP) ― Jordany Valdespin hit a grand slam in the 10th inning and the New York Mets rallied past the Los Angeles Dodgers 7-3 Wednesday night to save early sensation Matt Harvey from his first loss of the season.

David Wright tied it with a two-out single in the ninth off Los Angeles closer Brandon League, handed his first blown save in six chances.

Matt Kemp hit his first homer of the year and drove in three runs as the Dodgers grabbed a 3-1 lead against Harvey.

The budding Mets ace pitched pretty well, though, and was bailed out when his teammates rallied late.