[ The Korea Herald – Send E-mail ]
[Newsmaker] Yasukuni: Perennial thorn in Korea-Japan ties
By Shin Hyon-hee
Published : Apr 23, 2013 - 20:21
Updated : Apr 23, 2013 - 20:21
At the very heart of bustling Tokyo, a surreally serene, spacious shrine greets hundreds of thousands of worshippers every year seeking to pay tribute to their ancestors and lost loved ones.

Albeit being one of the city’s most exquisite landmarks, the temple has for decades been a source of diplomatic feuds between Japan and its neighbors such as Korea and China. 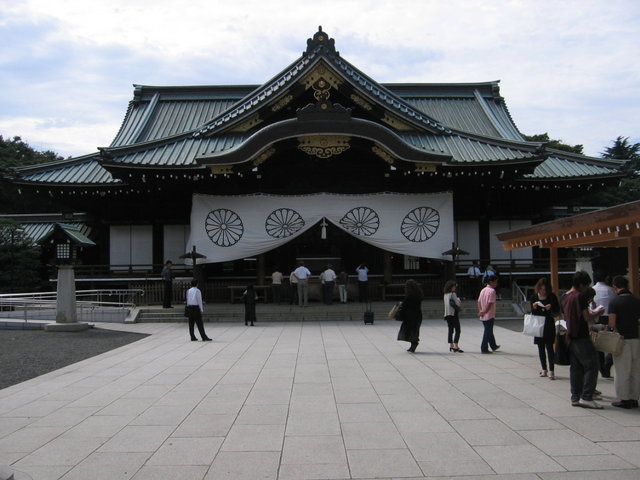 Yasukuni Shrine in Tokyo has been at the center of diplomatic feuds between Japan and neighboring countries.
For Seoul and Beijing, their pilgrimage is seen as a testament that Tokyo does not repent for its imperialist past and wartime transgressions such as massacres, sex slavery and forced labor.

Yet again acrimony is fomenting. Korea’s Foreign Minister Yun Byung-se on Monday shelved his first trip to Tokyo since coming into office after Japanese Cabinet members prayed at the shrine over the weekend.

The visits were timed with Japan’s Kinensai spring harvest festival but also appeared to take into account a crucial upper house election in July. Such politically motivated displays put further strain on the two countries’ ties at a time when their cooperation is increasingly essential in hemming in North Korea’s flagrant threats of nuclear annihilation.

Particularly disturbing to Seoul officials was the participation of Deputy Premier and Finance Minister Taro Aso, who attended President Park Geun-hye’s inauguration ceremony in February and separately met with her at her office. Known for his Korea-friendly attitude, the former Japanese prime minister came here as incumbent Shinzo Abe’s special envoy.

A more forward-looking relationship with Japan, which the budding Park administration set as a key task for the next five years, appears far-fetched ― at least for now.