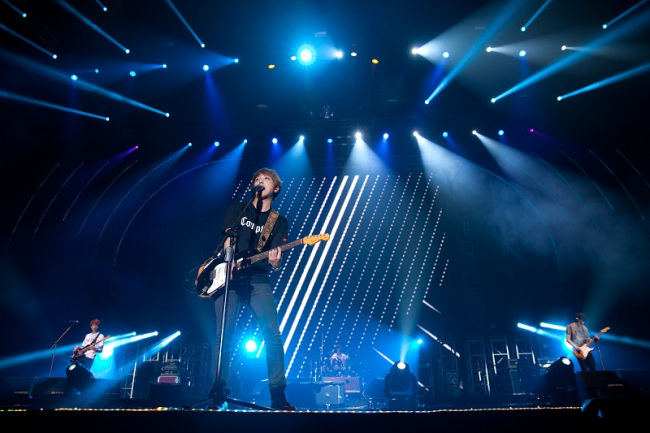 CNBLUE
“Searching for happiness across someone else’s fence is foolish. You should look for the blue bird of happiness under your own eaves.”

The most famous group of people that lives by this advice by Maurice Maeterlinck in “The Blue Bird” is probably the K-pop boy band CNBLUE. CNBLUE consists of four talented artists: Lee Jong-hyun, Kang Min-hyuk, Lee Jung-shin and the leader, Jung Yong-hwa. Each member is a singer-songwriter, actor and producer.

The full name of the band is “Code Name BLUE.” “BLUE” refers not to the actual color, but to an acronym from the initials of the four members’ characteristics. However, it still holds to philosophy of “The Blue Bird” that each member finds happiness from one another and spreads that treasure to the world. As a result, CNBLUE is a metaphor of a factory that produces love from the four distinct characteristics represented by each band member: Burning Lee Jong-hyun, Lovely Kang Min-hyuk, Untouchable Lee Jung-shin and Emotional Jung Yong-hwa.

Jong-hyun possess all the qualities of a “golden boy” -- tall, a handsome face, excellent taekwondo, judo and swimming skills and fluent in Japanese. Even so, he picked CNBLUE as his only pride, claiming that it is a truly excellent team in an interview with Japan’s Oricon Style magazine last August. Band leader Jung Yong-hwa agreed, further adding that they are a really happy band that he is proud of. If it were in Korea, “golden boy” Jong-hyun’s statement would sound too humble, bordering on sarcasm. However, the band members’ voices prove the veracity of their love for the team.

Directly after graduating high school, the four members lived through hardship. They had to perform in front of meager audiences gathered outside at Tokyo’s Shinjuku Station, Shibuya Station, Yoyogi Park and other places. Once they were kicked out during their weekend performance at Yoyogi Park. Despite such adversaries, Jungshin reminisced, “I was happy to have music and my mates pull me through hardship.” Their friendship which lasted through both joy and sorrow appears in CNBLUE’s lyrics, such as “The tears and sweat rolling down my face / There is paradise / Such chaos and dismay drown me in my despair and tears / The wandering continues but I’m trying to enjoy it day by day” in their song “Feeling.”

Loveliness is not just reserved for Min-hyuk. When Jung-shin and Yong-hwa had different schedules, Jung-shin called the leader up and told him, “Good night, brother. I left some vitamin drinks on your desk. Make sure to take them before you sleep.” The leader Yong-hwa was deeply moved. Last year, in an interview with Japan’s Junon magazine, Min-hyuk confessed that Jong-hyun is like his true brother. Jong-hyun, on the other hand, described Min-hyuk as as caring as his own mother. Jung-shin also praised the team’s leader as having a heart as warm as the sun. They all emphasize that their friendship will continue even when they are old.

Having genuinely tasted love, CNBLUE carries on distributing happiness. For four years since their debut, the band has delivered emotional catharsis to their fans through their concerts. However, it has also been three years that they have been giving back to the community by helping the poor. Yong-hwa was the first celebrity to ask online on Korean portal Naver about ways to serve the community. His question, posted on April 5, 2011, received numerous answers and praises.

Realizing the band’s spirit of distributing happiness, CNBLUE has been active nationally and internationally in helping the destitute. Through Donation Concert.com (www.k-popgiveconcert.com), CNBLUE has been contributing their musical talents for yearly donations of rice to Korea Food for the Hungry International since June 2011 for the elderly living in solitude. Internationally, they established “CNBLUE School” last year in Niamadougou Village, Burkina Faso. Furthermore, they stated on April 4 that they plan to build another school in Africa with the donations earned from their World Tour. Despite their busy schedule filled with filming dramas and recording tracks, CNBLUE never rests from their concert tours around Asia, Oceania, Europe and North and South America in order to raise more donations.

Earlier on April 6, CNBLUE’s Taiwan concert for 11,000 fans was featured on the local CTV News and other famous channels. One highlight of this concert was Yong-hwa singing his self-composed “I’m sorry” piece acoustically after performing the original version filled with energetic beats. The single “Coffee Shop” also received fervent applause from the audience, proving the band’s “Re: Blue” album as No. 1 on the U.S. Billboard World Album Chart. CNBLUE will continue the tour to Singapore on April 13, followed by Bangkok, Hong Kong and Seoul in May, and finally Sydney, the Philippines and Beijing in June.

The members confessed that their experiences of hardship led to the discovery of genuine love for humanity. They strongly wish to share and alleviate hardships of the impoverished. CNBLUE increasingly resembles “The Blue Bird,” which symbolizes the hope of our world.