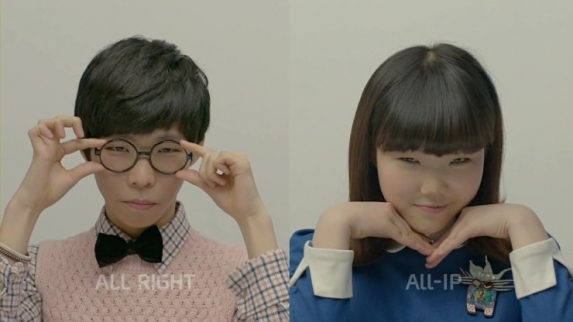 Akdong Musician
If one translates “akdong” straight into English, it would be “mischievous child,” similar to French author Jean Cocteau’s “enfant terrible.” Challenging against what the former generation has defined as their misbehaviors, these akdong are troublesome beings to the adults.

So does the appearance of these akdong in K-pop necessarily mean the crisis of internationally acclaimed Korean music? The result is the opposite. Presented as a type of irony or sarcasm, the Akdong Musician duo is the first to actually perform at their natural age level. There was never a teenager who performed like a teenager in the history of K-pop. Thus, their fresh performances attract the older generation. These teenage musicians, along with their experimental music, even surprised the K-pop composers and producers who were already at the center of the global K-pop industry.

As the winners of Korean broadcaster SBS’ “K-pop Star 2,” Akdong Musician implies various achievements. The biggest would be the successful scouting of talented musicians who compose music best suited to them and powerful lyrics that everyone can sympathize with. The first such musician was Busker Busker.

Until now, musicians like Akdong Musician were covered by the performance-based idol singers. However, it would be a mistake to comprehend the quality of musicians by such phenomenon. Even the singers with strong character need to have good music with adequate sensitivity to arouse the public sympathy. Though Akdong Musician only consists of two teenagers, it is also favored by middle-aged Koreans. Their self-composed pieces are accomplished enough to compete against the already established musicians in the market.

The Akdong Musician duo is especially acclaimed for its touching lyrics: “This place where dreams are realized… / A day when today feels like memory, / I wish for that day to arrive.” Written as a tribute to the contestants leaving “K-pop Star 2,” Lee Chan-hyuk’s lyrics are not filled with mere metaphors and other figurative language but with digital era’s colloquialism. Moreover, when expressed through Lee Soo-hyun’s clear and malleable voice, “Tearful Farewell” comes to life and melts the audience’s hearts just like “a stanza in a poem,” as expressed by judge and YG producer Yang Hyun-suk at the final round on April 7.

Having been homeschooled, Akdong Musician describes “K-pop Star 2” as a place of creation and realization of dreams. On the other hand, the young duo’s creation poses a fresh threat to the idol entertainment agencies. Unless idols change, they are in danger of disappearing from the national stage. Moreover, products associated with idols have lost their shine these days.

Their birth has led to clues about future strategies of “hallyu,” the Korean culture wave. Akdong Musician’s first place in the auditions means that the music consumers’ level and point of view have improved and varied. In the past, there were separate production processes for automobiles sold nationally and internationally. The same car type had a wider range of options and better quality for those to be sold overseas. It was a time when the Koreans were inexperienced as car critics.

The same applies to cultural products. It is ironic to have separate products for overseas markets. What was targeted nationally also works internationally, as seen with Psy’s “Gangnam Style.” In the same context, the beginning of Akdong Musician will raise our cultural consumption level. Overall, everyone is expecting a sound competition between Akdong Musician and Busker Busker.