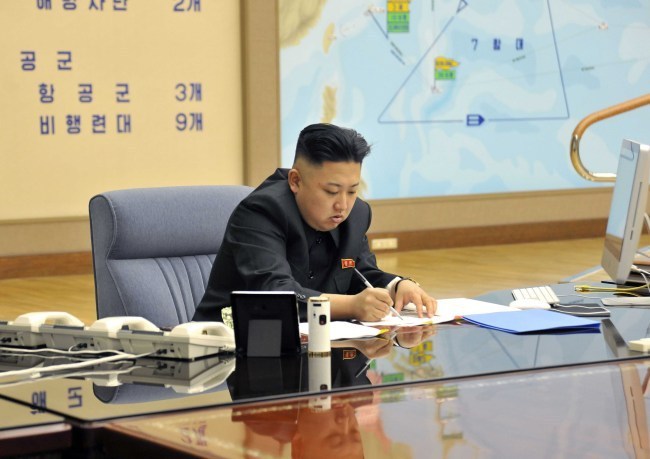 North Korea's young leader Kim Jong-un has not been seen in public over the past two weeks, setting off speculation that he might be tempted to tone down fiery threats of provocations, according to sources and an analyst on Sunday.

Kim's absence from the public eye, judged by the North's choreographed media reports, was not unusual, but this month's disappearance from public view comes amid heightened tensions on the Korean Peninsula as Pyongyang is expected to launch a mid-range ballistic missile.

Kim is widely expected to appear in public on Monday, when Pyongyang marks the birthday of its founder, Kim Il-sung, the grandfather of the current leader. Seoul's military officials have also said that a missile launch by Pyongyang could happen on Monday.

Kim has been absent from public view since April 1, when he presided over an annual rubber-stamp parliamentary session.

An official at Seoul's intelligence authority denied rumors of a coup against Kim, saying no unusual movement surrounding the North's leader has been detected.

A source familiar with North Korean matters said Kim's absence is a part of the North's "psychological warfare that could grab attention from South Korea and the United States."

On Saturday, Kerry met with Chinese leaders in Beijing and they agreed to work together to lower tensions on the Korean Peninsula.

Kerry's visit to South Korea, China and Japan coincided with recent warlike rhetoric from North Korea, which has repeatedly threatened war since it was punished by the U.N. Security Council for conducting its third nuclear test in February.

The question is whether the North Korean leader would heed messages from Seoul and Washington and scale back his belligerence.

Chang Yong-seok, senior researcher at the Institute for Peace and Unification Studies of Seoul National University, was skeptical, saying it would be difficult for North Korea to tone down its bellicose rhetoric because there was no face-saving reason to do so.

"Rather than attempting to change the current situation, North Korea is likely to keep raising tensions, while there is a possibility of slightly adjusting the level of tensions," Chang said.