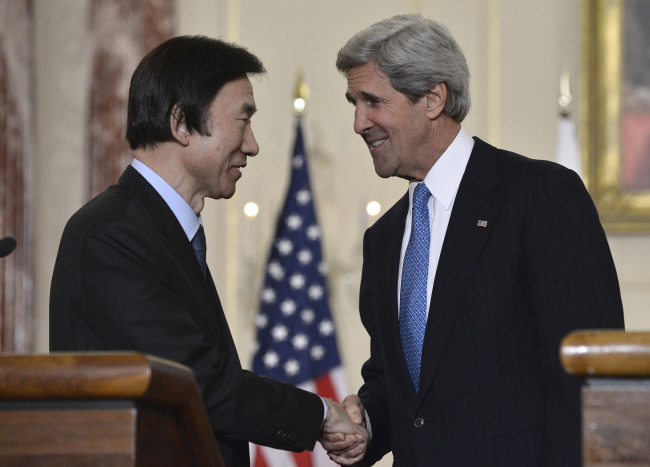 Yun Byung-se, South Korean Minister of Foreign Affairs and Trade, shakes hands with U.S. Secretary of State John Kerry during a joint press conference at the U.S. State Department in Washington, D.C. on Tuesday. (Xinhua-Yonhap News)
North Korea’s escalating nuclear threat is posing a trickier conundrum to Seoul and Washington, prompting calls for a big change in their strategy for deterrence and denuclearization of the communist foe.

During a key parliamentary session Sunday, Pyongyang adopted a policy of concurrently pursuing economic development and nuclear armament. On Tuesday it unveiled a plan to restart the 5-megawatt graphite-moderated nuclear reactor in Yongbyon.

The communist state already defined itself as a nuclear-armed state in a constitutional amendment last year.

“In realistic terms, both Seoul and Washington may have to acknowledge the North’s current nuclear status to a certain extent, should there be negotiations with it later, albeit highly unlikely for now,” said Ahn Chan-il, director of the World North Korea Research Center.

“With the constitutional revision and after the third nuclear test on Feb. 12, Pyongyang is unlikely to abandon nuclear programs. The contours of the future negotiations have apparently changed.”

With the reactivation of the two-decade-old nuclear reactor, experts believe some 7 kilograms of plutonium can be extracted to build one atomic bomb each year. They also pointed out given its old age, it may be able to extract only half its production capacity.

The reactor was suspended in 2007 under the so-called October 3 agreement at the multilateral denuclearization talks, which stipulates economic compensation and other benefits to Pyongyang in return.

Experts said North Korean leader Kim Jong-un had various motives with regard to his regime’s pursuit of a nuclear power state.

They said that internally, Kim sought to consolidate his leadership of the 1.19-million-strong military and foster national pride as a strong military power, while seeking to raise the stakes in future negotiations with Washington and Seoul.

Ahn noted nuclear arms for the North Korean regime were also critical in transferring some of its young military staff to the work of economic development.

“Kim apparently wants to reduce his troops by around 200,000 so that young people can be put into the sites for economic development. With the nuclear arms, it could also overcome its inferiority in terms of conventional weapons and focus on its economy instead,” he said.

This week, Kim appointed Park Bong-ju, who was once touted as a symbol of economic reform in the reclusive state, as prime minister in an apparent display of his desire toward shoring up the moribund economy.

Whatever the reasons might be for Pyongyang’s nuclear armament, experts said Seoul should make sure that it has effective plans to deal with it in tandem with its ally the U.S.

“Basically, Seoul should think about two things. One is how to bolster its deterrence in the mist of Pyongyang’s nuclear threats. The other is to continue the pressure in close coordination with the international community to make the North renounce nuclear arms,” said Kim Yeoul-soo, politics professor at Sungshin Women’s University.

What is crucial now for peninsular security is to preclude any “misjudgment” by the North, experts pointed out, stressing Seoul and Washington should think about how to find the delicate balance between sticks and carrots.

“The inexperienced North Korean leader could be surrounded by hawkish military brass, having difficulty making balanced decisions that involve both diplomatic and military factors. This could worsen the situation,” said Chun In-young, professor emeritus at Seoul National University.

“President Park Geun-hye has recently urged a stern response to any provocations without political considerations. Both should caution against a serious escalation of the situation.”