To frontline commanders, mutual trust and chemistry between the allied troops are as crucial as all the plans and equipment in maintaining a robust deterrence.

The alliance between the two militaries has deepened over the last six decades, evolving beyond the role of peninsular defense toward the shared goals of promoting world peace and prosperity.

The depth of the allies’ robust ties was demonstrated here on the soccer field on Monday as soldiers from South Korea’s 26th Mechanized Infantry Division and the U.S. 2nd Infantry Division ran and sweated together despite lingering winter chills. 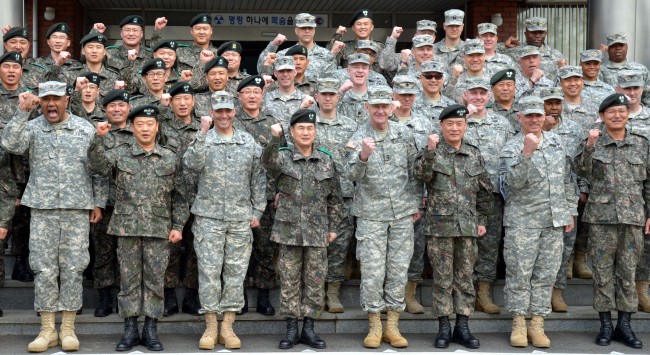 “This is going to be our first step to create that camaraderie, by playing on the field where we can build that relationship,” Lieut. Col. John Chu, a member of a soccer team consisting of both Korean and U.S. soldiers, told The Korea Herald.

“I think if North Korea knows that we work together, have a tight relationship between the U.S. and the ROK (Republic of Korea), this will just continue to let everyone know we are on the same shooting music and we have the same goals in mind.”

The goodwill event was organized by the Korean division to mark the 31st anniversary of the partnership between the frontline divisions in charge of crucial battle missions in the event of war on the peninsula. It also celebrated the 60th anniversary of the alliance forged in blood during the 1950-53 Korean War.

From conducting regular tactical discussions and field drills to holding a variety of cultural events such as a musical concert, the units have strived to reinforce their relationship based on the belief that better understanding each other would help strengthen the foundation of the security alliance.

“We’re in a very close relationship with the 26th Division. It’s very old, all the way back to 1982. I feel very fortunate, honored, blessed to be able to do this,” Cardon said after scoring a goal in the first half of the game.

Hyeong said that through such an event, his division would seek to maintain the highest level of readiness amid high tensions prompted by North Korea’s saber-rattling moves including verbal threats to strike South Korea and the U.S.

“This event for our friendship has offered an opportunity to think again about the importance of the Korea-U.S. alliance,” he said.

“Through these and other events to come in the future, we would seek to build a robust operations system so that Pyongyang would dare not even think of launching provocations again.”

Last year, the two divisions signed an agreement on deepening bilateral cooperation on conducting allied missions to respond to possible provocations and infiltrations by the North. They have long conducted regular combat drills including joint firepower exercises.

Located some 30 km away from the North, the 26th Division is one of South Korea’s strongest mobile attack units. The division to play a critical wartime role for the defense of Seoul was founded in June 1953 near the end of the Korean War.

Formed in France in 1917, the 2nd Infantry Division is the only permanently forward-stationed division in the U.S. Army. It has so far demonstrated its combat capabilities through various major wars including the First and Second World Wars, Korean War and Operation Iraqi Freedom.