Under the plan the South would lead counter-provocation operations with the U.S. providing support, they said. It was signed by Seoul’s Joint Chiefs of Staff Chairman Jung Seung-jo and Combined Forces Command chief James D. Thurman Friday and took effect immediately.

“It was developed by mutual agreement between the ROK (Republic of Korea) and U.S. JCS chairman after the North Korean artillery attack on Yeonpyeong Island (in November 2010),” said the CFC in a press release.

“The completed plan includes procedures for consultation and action to allow for a strong and decisive combined ROK-US response to North Korean provocations and threats.” 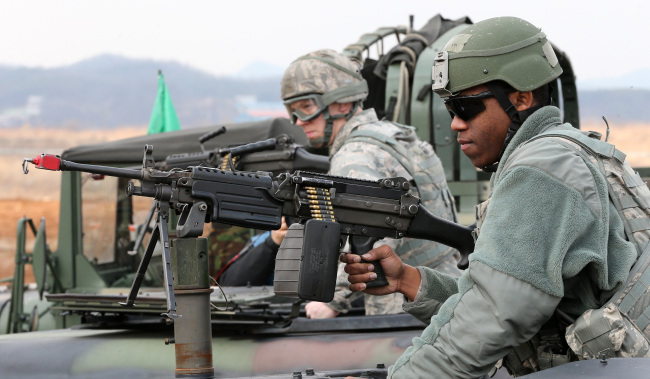 U.S. military police staff engage in base defense drills in connection with the allied Key Resolve exercise in Pyeongtaek, Gyeonggi Province, Thursday. (Yonhap News)
The allies did not elaborate on operational specifics, but the plan is thought to stipulate concrete steps for various provocation scenarios that could occur in the Military Demarcation Line and the Northern Limit Line, the de facto inter-Korean sea border, or within the Demilitarized Zone.

Observers said that U.S. military assets including those in Japan and the Pacific Command headquartered in Hawaii might be deployed to support its ally handling any provocation.

Seoul officials expressed satisfaction about the plan, stressing any future provocations would be met with a strong counterattack.

“Our military’s operational guideline, which calls for launching counterstrikes at not only the origin of provocation, but also forces supporting it and its commanders, has been reflected in the plan,” a military official said, declining to be named.

“Depending on the types of provocations and operational environments, U.S. weapons could be mobilized to strike back at North Korea’s territorial waters and soil.”

Last year, the allies agreed to sign the plan in January. But they delayed it despite North Korea’s escalating missile and nuclear threats, prompting speculation that they were at odds over the scope of a counterstrike.

Seoul has repeatedly said it would launch a counterstrike 10 times stronger than any provocation.

But Washington appeared uneasy about Seoul taking too aggressive a stance due to the risk of provocations escalating into a full-blown war, which could drag in both the U.S. and China at a time both powers are struggling with domestic challenges.

Following the announcement of the plan, some experts said the U.S. recognized Seoul’s right to self-defense in forging the new plan, while some expressed concern that the plan could clash with the U.N. Command’s armistice rules of engagement.

The rules of engagement, whose content is classified, is designed to check the excessive exercise of a country’s self-defense right so as to prevent an escalation of an armed clash and casualties resulting from it.

The allies’ counter-provocation plan seems to allow for a greater exercise of self-defense. But Seoul officials claimed the plan would not go beyond the rules of engagement.