Cheong Wa Dae announced Friday that Kim would retain his post as controversy-laden Kim Byung-kwan withdrew his nomination for defense minister amid a series of allegations of misdeeds.

Kim, 64, is the first defense chief to stay in office after a change of government. 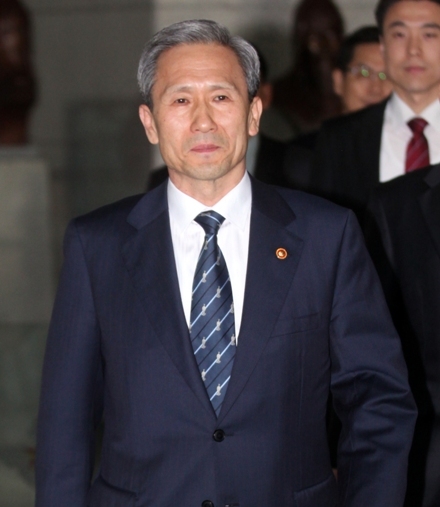 Kim Kwan-jin
“While maintaining the highest preparedness, our military would keep its top-level ability to respond (to North Korean provocations),” he told reporters following the announcement.

Taking the post shortly after the North shelled South Korea’s Yeonpyeongdo Island in November 2010, Kim has focused on removing the “bureaucratic atmosphere” and complacency widespread in the military and reshaping it into a combat-ready force.

He has repeatedly warned of launching a strong counterattack if provoked, which drew a fiery response from Pyongyang that called him the “most serious warmonger.”

With Kim remaining in the post, observers said the Park Geun-hye government should be able to smoothly manage pending security tasks including maintaining deterrence and preparing for the retaking of wartime operational control slated for December 2015.

But there appear to be some issues he might differ with the president over. Throughout his term, Kim has advocated for reorganizing the top command structure by merging the currently separated military administration and command. Some security officials in the new government are seen as negative about some of the proposed changes.

Kim, who studied in Germany’s military academy for three years since 1969, is well versed both in practice and theory. He has served as commander of the 35th Division, 2nd Corps and the Third ROK (Republic of Korea) Army; head of the Joint Chiefs of Staff’s operations headquarters; and JCS chairman.