[ The Korea Herald – Send E-mail ]
[Voice] Should SOFA be revised?
By Korea Herald
Published : Mar 18, 2013 - 20:03
Updated : Mar 18, 2013 - 20:03
Crimes by U.S. soldiers stationed here have long been a sore spot in U.S.-Korea relations. The question of who maintains criminal jurisdiction over personnel accused of crimes in particular has often been the subject of controversy. The U.S.-South Korea Status of Forces Agreement, which deals with the investigation and punishment of United States Forces Korea personnel, has typically faced calls for revision after high-profile crimes by American personnel.

The debate was reignited once again this month after three American soldiers led Korean police on a car chase across Seoul that ended in one soldier being shot by a policeman who later claimed to have feared for his life. Police had originally confronted the three after complaints they had been shooting civilians with a BB gun in Itaewon. While the USFK handed over the suspects to the Korean authorities for questioning, the incident, and a number of other crimes involving U.S. soldiers since, has fueled calls for revision of the agreement that has been renegotiated several times since its original signing. 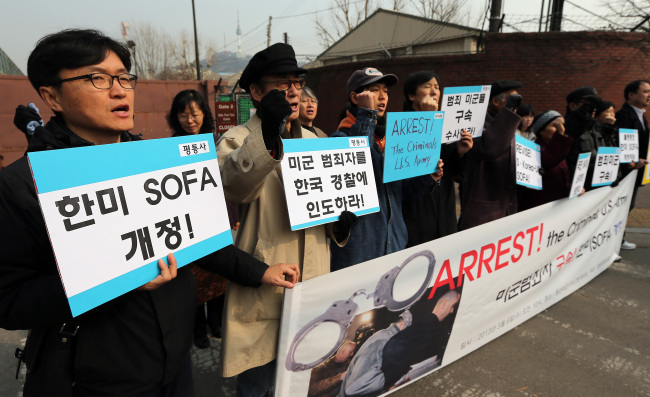 Members of civic group Solidarity for Peace and Reunification of Korea protest outside the U.S. Army Garrison Yongsan in Seoul, demanding revisions to SOFA. (Yonhap News)
Yang Uk, a research fellow at the Korea Security and Defense Forum, is among those who see problems with the current agreement.

“The reason why the SOFA regulation is different from Japan and Germany is that the U.S. could not believe (in) our judicial system back then. We have a very credible system right here (now) so it should be changed,” said Yang.

Critics of SOFA argue that its terms are less beneficial to Korea than similar agreements with Germany and Japan. Specifically, they say, the agreement inhibits Korean police from entering U.S. bases to interrogate or give chase to suspects.

“It is understandable that U.S. forces don’t want any foreign police on their bases or camps, but actually, they are working with Korean society so their help will be crucial to U.S.-Korea … cooperation,” said Yang. “So that’s the desirable change.”

If some local media reports are to be believed, the demand for change is not confined to private citizens. A local daily reported earlier this month that the government was planning to begin talks on the revision of SOFA, possibly before the month was out.

A spokesman for the Ministry of Foreign Affairs and Trade, however, told The Korea Herald that no such talks were under way, nor were any planned. Chun Young-hee, director of the SOFA affairs division at the ministry, added that the ministry does not currently see any problems with the agreement.

While acknowledging that the Japan-U.S. SOFA had strong points compared to the Korean version, Choi also said that it was difficult to compare the agreement with that of other countries.

Choi added that the ministry was working closely with the American side on the Itaewon case and had full confidence in the investigation by the Korean police and courts, whose verdict the ministry would respect.

A spokesperson for USFK said that there were currently no plans to discuss revisions to SOFA.

“While both sides regularly consult on ways to improve implementation of the SOFA, there are no plans to discuss revision,” said Jennifer Buschick, the chief of public information for USFK public affairs.

In response to the perception that SOFA was not as favorable as agreements with other countries that host U.S. troops, Buschick said that USFK cooperated fully with the Korean authorities in cases involving U.S. soldiers.

“The ROK authorities have the full authority to investigate the ROK primary jurisdiction cases, and USFK provides full cooperation to ROK investigative authorities and makes USFK members for Korean proceedings whenever requested. Korean police are able to enter U.S. bases to interview suspects in close cooperation with military law enforcement authorities when necessary, as shown recently by the Korean police interview of a service member in the Brian Allgood Army Community Hospital,” she said.

“As soon as he was medically determined to be conscious enough to answer questions, he was made available. His medical records and the bullet removed from his chest were provided to the KNP as evidence.”

For some observers, however, it is not the text of SOFA itself that is the problem. Choi Seung-hwan, a professor of law at Kyung Hee University who has studied SOFA issues, said the biggest issue was a lack of willingness on the part of the U.S. military and Korean government to control crime and nuisance behavior by USFK personnel.

“My feeling is that the American authorities in charge of American soldiers here in Korea are very reluctant to control (them) even though they have committed very serious crimes in Korea,” said Choi. “They don’t cooperate with Korean authorities to settle, to solve criminal issues.”

Like other critics of the USFK, he sees a disparity between the American authorities’ attitude toward Korea and other countries with status of forces agreements.

The environmental impact of the U.S. military presence here has also caused controversy over the years. In 2011, claims by a number of U.S. veterans that the military had buried drums of Agent Orange at Camp Carroll in Waegwan, North Gyeongsang Province, prompted a joint environmental probe by USFK and the Environment Ministry. The impact assessment found no evidence of Agent Orange or risk to human health, though the UFSK admitted to burying various chemicals at the site.

More infamously, in 2000 the U.S. military was forced to apologize for dumping formaldehyde in the Hangang River. SOFA does not place responsibility on the USFK for environmental matters. Choi said that environmental damage by the U.S. military and subsequent refusals to accept liability were further examples of the problematic attitude shown toward the local population.

But others insist that USFK transgressions have to be put in their proper context. Nam Chang-hee, a social sciences professor and Northeast Asia affairs expert at Inha University in Incheon, said that it was unfair to focus on crimes by U.S. soldiers alone.

“I believe vocally criticizing American soldiers’ crimes while keeping silent about Korean soldiers on the part of some anti-American civic groups is a bit unfair, considering the fact that many American soldiers are here to protect the common interests of both South Korea and the U.S., possibly risking their lives if conflict does occur.”

Buschick of the USFK pointed out that the number of personnel involved in criminal incidents had fallen from 341 in 2011 to 283 in 2012 and that only a small fraction of personnel ever got in trouble with the law. She added that USFK made “no excuses” for soldiers “whose behavior is contrary to our values and demeans our profession.”

“We encourage our service members, civilians, and family members to participate in the many activities offered by various organizations and programs that connect our community to the local community in mutually beneficial ways. For instance, the Good Neighbor Program promotes cultural awareness and volunteer opportunities. Various organizations such as Army Community Services offer free culture and language classes.”

Asked whether USFK was worried that crimes by its personnel could lead to unwarranted calls for SOFA’s revision, Buschick said that unfair portrayals of USFK issues in the media and elsewhere were a cause for concern.

“There is concern when these issues are inaccurately reported, politicized or unfairly portrayed in the media.”

SOFA refers to an agreement that is designated to regulate the legal position of U.S. forces. This agreement was ratified in order to prevent U.S. forces from committing social crimes. However, this agreement has been politicized since the agreement has numerous problems. Even though SOFA was revised in 1991 and in 2001, the agreement is still abstract and disjunctive. It is essential that SOFA should be revised in a way that is fair for both the United States and Korea.

According to SOFA, it is difficult for Korea to wield authority. From the point of view of Korea, SOFA refers to an agreement that is ratified by the National Assembly. In contrast, from the perspective of the U.S., SOFA is an agreement that is established without the ratification of the National Assembly. As a result, the agreement is relatively unequal to Korea. When it comes to trial, it always becomes a problem which country should exercise criminal jurisdiction. In this light, the agreement, SOFA, should be revised in a way that is fair to both countries.

On top of that, currently, SOFA is so abstract that there are several circumstances in which it is difficult to make final decision. To specify, it is difficult to figure out which situation should be interpreted as “a situation in which U.S. forces are carrying out public duties.” When American forces harm or commit crimes against Koreans, there is a chance that the American soldiers can claim that they were on duty. Considering the number of problems with SOFA, the Korean government and the U.S. government should take account of its revision.

Truth should be the ultimate litmus test for libel, slander or defamation. The current laws only serve to protect evil actions. The claim is that they are to preserve a person’s name or character. If a person has done nothing wrong, then they have nothing to worry about. Discussing that person’s actions brings no shame.

However, if a person has done wrong, it was that person’s own choices and actions that damage their character. Talking about the fact that a person has poor character is not what gives them poor character. As long wrongdoers can hide their actions, and those who expose wrongdoers are punished, there will continue to be corruption on many levels within a society. It’s only when evil is exposed that it can be rooted out.