Korea attempts to reconcile these principals through broad-based laws that apply the concept of defamation more loosely than many other democracies. Unlike in most U.S. states or the U.K., but like much of the wider world, defamation is a both a civil and criminal offense, carrying the threat of up to 7 years’ imprisonment.

Truth does not offer absolute protection from prosecution, reflecting the Korean Constitution’s provision that “neither speech nor the press shall violate the honor or rights of other persons.” The burden of proof is on the defendant to prove his statement to be true and “solely in the public interest.”

“The rationale here is that even true statements are fully capable of tarnishing a person’s reputation, and if such true statements serve no public purpose, they are defamatory in nature,” said Kang Ju-won, an attorney and member of the Seoul Bar Association. “The aim is to protect the reputation of the individual unless it is outweighed by the public’s need for disclosure.”

Defamation of the dead is also possible, though, in contrast to cases related to the living, statements must be false. Former National Police Agency head Cho Hyun-oh fell foul of this law for claiming that a huge slush fund belonging to late President Roh Moo-hyun had been uncovered the day before he committed suicide. Cho was sentenced to 10 months in prison on Feb. 20. 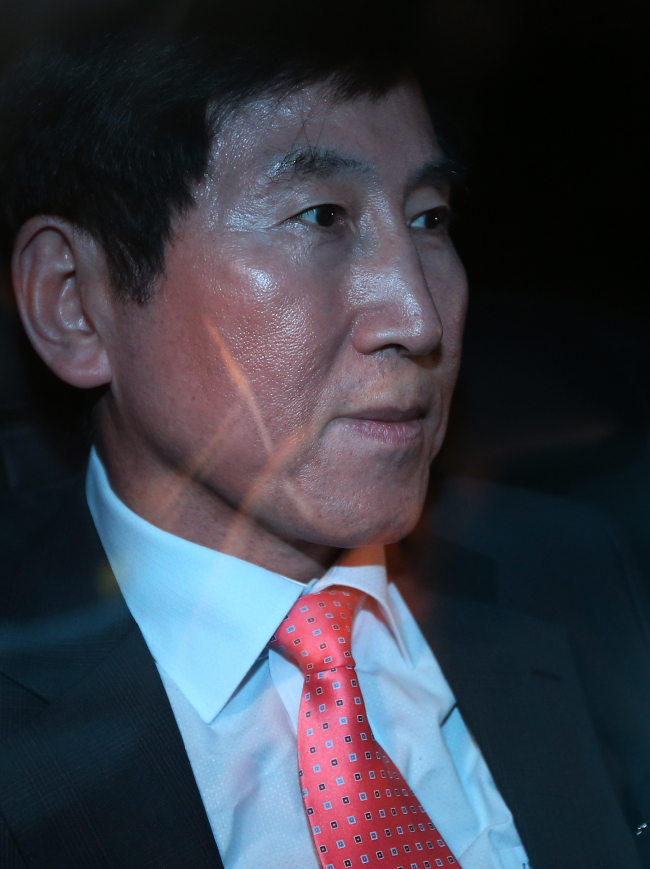 Former National Police Agency chief Cho Hyun-oh leaves a detention center in Seoul on bail just over a week after being sentenced to 10 months in prison for defaming late President Roh Moo-hyun. (Yonhap News)
The provision applying to the dead would appear to be unusual internationally. An article by Swedish freelance journalist Nathalie Rothschild, however, makes reference to a rarely-invoked Swedish law allowing for defamation against the dead. Meanwhile, a 2011 article from British newspaper the Guardian reports that Scotland, Australia, New Zealand, Canada and Ireland have all at least reviewed provisions to allow redress for families of deceased persons.

“The defamation law for the deceased is to protect the social and historical evaluation of the dead person and is based on the idea that even though personal rights end when the person is dead, respect for him or her can be harmed by slander,” explained Ahn Sang-woon, an attorney at Jeil Law Office in Seoul. “With that reason above the Korean criminal law states that those who cause defamation against the deceased are subject to imprisonment of two years or less or a fine of 5 million won or less, which is lighter punishment than defamation against living people.”

The Ministry of Justice declined to comment on the rationale for the provisions regarding truth and deceased persons, or whether changes were planned to the law. It did, however, provide The Korea Herald with a detailed breakdown of the number of convictions over the past five years.

The Korean Supreme Court has officially adopted the stance of New York Times Co. v. Sullivan, the U.S Supreme Court decision establishing the requirement of malice for defamation of public officials, thereby making successful action extremely difficult. However indictments have continued against public and private figures alike, with the overall number of convictions having risen in the last five years.

Last year, from 13,248 criminal complaints lodged with the prosecution, 3,223 people were convicted. The number in 2008 was 2,500 convictions resulting from 8,814 complaints. While the vast majority of those found guilty were fined, 24 people were sentenced to prison terms in 2012.

Kang said that it was difficult to gauge from the figures whether courts were adopting a stricter or looser interpretation of the law in recent years.

“Some argue the courts have tended toward a stricter interpretation of the law because complaints for defamation have increasingly been made in attempts to gain an upper hand in and outside court battles,” he said. “Public figures have been known to make complaints of defamation in an attempt to sway public opinion or deflect public attention from real issues. On the other hand, one could argue the courts have allowed for a looser interpretation of the law because statistics show the number of people prosecuted and ultimately found guilty of defamation has steadily increased over the last few years.”

Ahn believes that prosecution for statements about public figures in recent years has been in tension with the rulings of the Korean Supreme Court.

“The representative cases are the Minerva incident and MBC’s ‘PD’s Notebook’ incident,” he said. “Both these cases heavily regulated freedom of expression because it criticized government policy.”

Against this backdrop there have been moves to change the law at the National Assembly. Last June, Democratic United Party lawmaker Park Young-sun introduced a bill to ease the country’s defamation laws that is currently pending at the Assembly.

“Recently, a few legislators have introduced a bill intended to amend the crime of defamation, said Kang. “They propose that ‘true’ statements or even statements made about a ‘public figure,’ in principle, should not constitute criminal defamation. Defamation issues should be resolved through civil litigation without state intervention. They also point out the current law not only lends itself to abuse by authorities but also functions to undermine press freedom.”

Yet, there is also a push for reform from the other direction, according to Lee Ji-young, a public defender and attorney at the Anyang branch of Suwon District Court. She said that the current momentum was rather with stricter penalties for defamation.

“Rather, there is a growing sentiment that libel or defamation offenders should be severely punished. Especially abusive comments and postings are main causes for that,” she said.

Lee further noted that damages awarded for defamation in Korea, which does not recognize punitive damages, tended to be low

“The reason is that it is hard to prove appropriate compensation from emotional damage by libel or defamation. And Korean civil court doesn’t have a clear solatium (compensation for injured feelings as opposed to physical injury of financial loss) system is the other reason. It is a tendency that court doesn’t award more than 1-2 million won in civil cases related to libel or defamation unless plaintiffs prove other special damages.”

Ahn, while describing Amnesty International’s criticism of the nation’s restrictions on free expression justified, said that Korea should follow the lead of the U.S. in introducing punitive damages.

“Since the Supreme Court of Korea takes the stance of guaranteeing individuals’ freedom of expression, I believe it is time to accept the punitive damages system from the U.S.,” he said. “However, since the press and the Assembly are very passive and reluctant to see such a bill passed, individuals’ human rights are egregiously violated sometimes. Sufficient compensation and improvement should be made.”

Change, one way or the other, may be inevitable with time. Kang said public and judicial opinion could shift to see a greater range of expression as not being harmful to society, just as the Constitutional Court ruled the law against sex under the pretense of marriage unconstitutional in 2009.

“Each legal jurisdiction may have its own unique considerations when it comes to shaping public policy. In Korea, crimes against reputation are, in essence, seen as posing a threat to the society or community as a whole.”

There are currently too many reasons to avoid punishment in a libel case. The most used justification is to say it was for public interest. In a case I supported when I was working in the teachers’ association, one newspaper clearly wrote false statements about our client, and they knew that it was false. They did it on purpose to support my client’s opponent because they had connections with them. But they said that they were just trying to reveal the truth for public interest, and the only thing they did wrong was just that they got the facts wrong. And they walked freely out of the court.

After several tries they got just a 500,000 won fine, but our client’s life was ruined. He was already socially a criminal although he was not guilty. If just 500,000 won is the cost to ruin one’s life, that’s surely too weak. But the reality is that even the 500,000 won was gotten by the support of a powerful association and several law experts. That’s something impossible for an ordinary citizen. Currently, for an ordinary citizen there is almost nothing you can do in this country if someone ruins your life by spreading false rumors. The cases in the press are mostly cases of celebrities, entrepreneurs, politicians who have money and power. In reality that’s not what common people can do to their harmers.

Truth should never be considered libel.