[ The Korea Herald – Send E-mail ]
[Voice] What is the future of religion in Korea?
By Korea Herald
Published : Mar 4, 2013 - 20:00
Updated : Mar 5, 2013 - 10:19
Korea’s experience of religious belief is as varied as it is long. Shamanism, with a history of some 5,000 years, is the belief system with the longest presence on the peninsula. Buddhism, introduced from China in the fourth century, found favor among the rulers of the Three Kingdoms and, later, Goryeo period. Not so much a religion as a philosophy, Confucianism was to become the moral code of the Joseon era, which largely tried to suppress Buddhism. From the mid-20th century, particularly, it was the turn of Christianity to flourish and make a lasting impact on the country.

The most recent surveys indicate that about 50 percent of contemporary Koreans identify with a religion, with Christianity claiming the most followers at almost 30 percent of the population. The split between Catholics and Protestants is roughly 2-1 in favor of the latter, most of whom are evangelical.

“It is this form of Protestantism that arrived in Korea in the 1880s and has flourished in the peninsula, especially in the South,” said Timothy S. Lee, an associate professor of Christian history at Texas Christian University.

“Evangelicalism introduced modernity to Koreans, who were very much seeking it, especially in the areas of medicine and education. It brought a viable religious life to a great many Koreans who found their traditional religions such as Buddhism and Confucianism no longer creditable. And it served as an ideological bulwark against Japanese colonialism.” 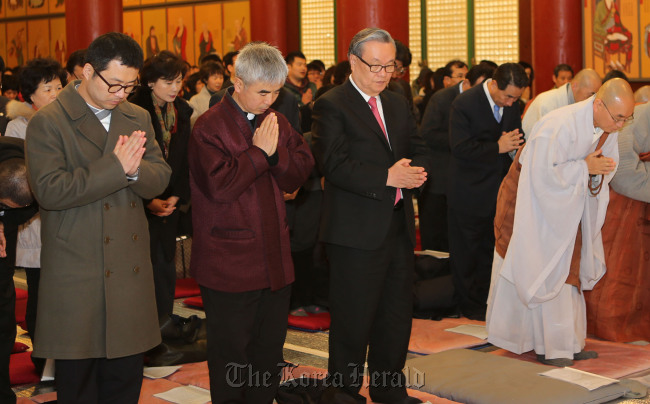 Religious leaders of different faiths participate in a Buddhist ceremony to commemorate Korean Independence Day on Friday. From left is, Lee Eung-joon, a Won Buddhism minister; Choi Jong-su from the Catholic Diocese of Jeonju; In Myung-jin, Galilee Church pastor; and Ven. Pomnyun, chairman of the Peace Foundation and founder of the Jungto community. (Yonhap News)
But despite the gusto with which religion is often observed here ― Korea produces more Christian missionaries than any other country besides the U.S. ― the nation, paradoxically, is also one of the most atheistic in the world. According to an opinion poll released last year by Ireland-based Red C, Korea had a greater proportion of atheists than all but four other countries, with 15 percent of the population describing themselves as “convinced” atheists. The same poll showed that religious belief was on the decline in much of the developed world, with a strong inverse relationship observed between economic development and belief.

Scholars of religion such as Lee, however, argue that religion will always have a place in people’s lives, with or without economic development.

“If you assume that humans are homo-religious and that the social is an inherent part of being homo-religious, as I do, there will always be an organized religion of some sort present among humans,” said Lee, who pointed out that religious belief had actually increased in Korea between 1995 and 2005, according to the national census.

“That religion may or may not be Christianity in Korea, say, 500 years hence, but there will always be some religion. And why shouldn’t it be Christianity? After all, Buddhism arrived in Korea over 1,600 years ago ― and it is still going strong.”

Kim Sung-chul, a professor of Buddhism studies at Dongguk University, said the fundamental desire of human beings for inner peace meant that Buddhism and other religions would endure in Korea.

“Let me put it this way: Although science continues to grow, people will still be the same,” said Kim. “They are attached, averted, ignorant, anxious, and at the same time their life patterns are destined to be identical, they drink, eat, express their sexual desire, and die with complete fidelity. Buddhism along with many other religions will never disappear, because they are effective in reducing mental anxieties in people and terror management in death.”

Buddhism has also had a profound impact on shaping the country’s moral foundation, according to Kim.

“Before religion controlled human society, people lived with the rule of ‘survival of the fittest.’ However, with Buddhism, people learned ‘good results from good, evil begets evil’… and inner peace. The non-violence movement on March 1 in Korea proves how the Buddhist behavior of non-violence is at the heart of Korean thinking and behavior.”

While Christianity saw sizable growth throughout the 1990s and 2000s, a much newer religion to the region has seen even more rapid growth in that time, albeit from a very small base. Islam has found a small but significant footing in the country, largely a consequence of immigration from Pakistan and Bangladesh. According to the Korea Muslim Federation, there were some 130,000 Muslims in the country as of 2009.

Park Dong-shin, the operator of the Islam in Korea Facebook community, is one of an estimated 30,000 Korean Muslims. He said that Islam had huge potential to grow in Korea.

“The rise of Islam is a global trend,” said Park, who converted from Christianity in his 20s after becoming disaffected with the corruption he perceived in the churches around him.

“The reason for that is the fact that there is an original text, the doctrines are clear, and the teachings are true, evident and practiced. The number of Muslims is growing in Korea, and as the global trend indicates a definite growth, I can say for certain that this trend will continue to grow.”

Not only is Islam’s rise inevitable for Park, it is key to restoring what he views as the more moral Korea of the past.

“Korea has a very similar tradition with Islam. For example, loving our neighbors and respecting our parents,” said Park. “Therefore, if Korea was to accept Islam, it would be freed from Westernization and capitalism, and the resulting rise in crimes and suicide due to the wealth gap. It could once again become a polite Eastern nation that seeks peace and goodness. Other religions do not really fit Korean nature, and the current Christianity is broken into many denominations and riddled with corruption. Major churches are even passed down from father to son.”

Organized religion, however, is not the only expression of spirituality.

Kim Hwansoo Ilmee, an assistant professor at the Department of Religion and Asian and Middle Eastern Studies at Duke University in North Carolina, sees people’s desire for spiritual sustenance persisting even if organized churches wane.

“The question about what religion you belong to, or what is your religion, didn’t exist until the late 19th century,” said Kim. “Even calculating the number of religious people is a modern phenomenon. Although you might see a decreasing number of people affiliated with religion … I think that the number of people who are spiritual won’t decrease in my opinion. You will be more open to spiritual practices without religious affiliation.”

Religion plays the major role in keeping national identity in Korea. I believe religion will be stronger and expand in Korea, especially Christianity, with its aggressive methods of evangelizing and building churches with training centers for church workers. There will be three major reasons for strengthening of religion in Korea.

The first reason, as discussed earlier, is the aggressive methods of bringing in more people into their religious communities. The religious infrastructure is getting stronger and stronger with each year due to the generosity of the community members. Training centers and companies are built to support the overflowing cash incomes of big churches and temples. They heavily invest into education, mass media, sending missionaries overseas and trade.

The second reason is social isolation of individuals. Even though Korea is part of Asia, where the family plays an important role, society gives little respect to the notion of family. Gathering once or twice a year during holidays, families seldom live together and are spread around the country. Feeling lonely or discouraged with their current life, individuals search for inspiration or purpose in life, turning to religion and religious ideology to fulfill their individual need to feel a sense of fulfillment and being meaningful in society.

The third reason is the growing presence of religious organizations in popular culture and mass media. More and more, we can experience religious communities or religious topics raised in movies, shows and books.

There are many temptations, not just wealth, that can keep people from living just and moral lives. There will always be a place for the true spirit of those who preached charity, forgiveness, and helping others. I believe in Jesus Christ and see many of the good works done for poor people that are not reported by the media. Good people in a good church can accomplish great things.

My hope is that religion eventually disappears from Korea and the world as people become more literate in science and critical reasoning. Belief in invisible spirits and an afterlife are just the opiate of the masses. A feel-good fantasy with no evidence to support it.

Far too much violence has been done in the name of religion, and nothing is changing in that respect. Atheists/agnostics have never been violent in their efforts to promote reason and science, but believers tend to be very violent to nonbelievers. Buddhism is a rare (and laudable) exception, but even most Buddhists are superstitious.

Buddhism is mind training, a treatment for existential anxiety and unrest. I hope its secular aspects are more fully realized in Korea and elsewhere, but theist religions are just so much social poison.