[ The Korea Herald – Send E-mail ]
Elderly performer helps others with her talents
72-year-old traditional dancer entertain fellow elderly with traditional song and dance
By Kim Young-won
Published : Feb 19, 2013 - 20:20
Updated : Feb 19, 2013 - 20:20
In the frigid days of late December to the first week of this month, snow piled ankle high on the streets of Jingwan-dong, Eunpyeong-gu, northwestern Seoul.

Newly remodeled buildings of Indeokwon, a nursing home standing on a low hill, are where nurses and social workers take care of around 300 elderly people.

In a room of the facility, a woman in bright clothing moves around singing “Gakseol-i Taryong,” a satirical and humorous song also known as “The Beggar’s Song,” with a rough but charming voice.

Shrugging their shoulders with smiles on their faces, they call Kang “my daughter.”

“Singing songs and dancing for these people who are like my mother makes me happy,” Kang said in an interview with The Korea Herald. 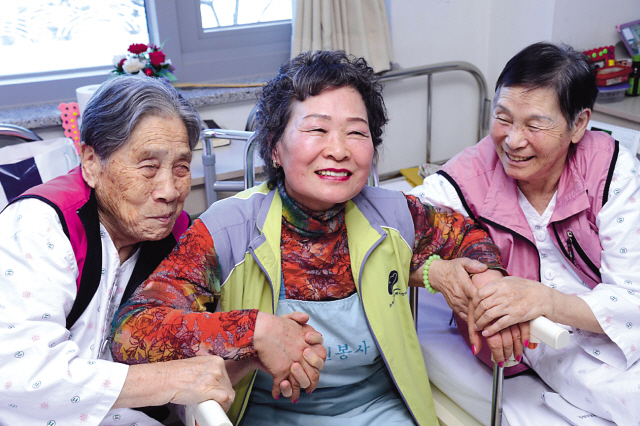 Kang Cheol-ye (center) poses with elderly women at Indeokwon nursing home. (Park Hae-mook/The Korea Herald)
Even on snowy days, she comes out to Indeokwon, albeit a little later in the day.

“My friends tell me I am crazy since I come to Indeokwon even when there is a downpour or it snows heavily.”

Kang has done more than 7,000 hours of volunteer work, a record she shares with another person in the district and for which she received an award from the Eunpyeong district office.

The actual time she has spent on volunteer work is much longer than the official record as she has volunteered on her own without registering at the office.

She also visits police agencies, military bases and penitentiaries as a member of a choir.

May, September and December are the busiest months for Kang because of the holidays including Parents’ Day, Chuseok (Thanksgiving Day) and Christmas.

She also sings and dances at birthday parties for the elderly who stay at nursing homes.

While attending the birthday parties, Kang tries to sing and show off some funny dance moves in men’s clothing to bring out smiles from those who spend most of their time inside the facilities.

Kang’s elder sister taught her traditional dances when she was in her 30s and dances to the “Beggar’s Song” in her 50s.

Visiting the nursing homes is almost a daily routine for Kang as she goes as many as four or five times a week.

Her day volunteering at Indeokwon starts at 7 a.m. She serves meals to the elderly, makes beds, does laundry and folds towels until 6 p.m.

She sees light injuries or scars she gets while volunteering as honorable decorations; she recently strained her tendons while feeding one of the elderly.

Though she started working at the nursing home with eight other volunteers, Kang is the only one who still goes there.

Despite looking vibrant and full of spirit at first sight, she is not a born happy-go-lucky person.

Before, she was rather depressed and hopeless after being diagnosed with uterine cancer and because of bad incidents that had happened to her family.

“I used to think every single day that my life was numbered. I was in deep depression when I went through the darkest period of my life after learning I had uterine cancer,” Kang said.

She long struggled to free herself from the fear of a reoccurrence after surgery in 1990.

Losing her daughter-in-law around that time in a car accident made the situation worse.

She had to live with the fear of relapse and death for five years until her doctor said she fully overcame cancer.

When the burden of a cancer relapse was gone, she decided to live a new life and to do so to the utmost.

The first thing that she decided to do was to share with others.

“I forget all worrisome problems while working for and hanging out with the elderly,” Kang said.

Even though she is not well off, she still sometimes financially helps a single mother neighbor and her two kids.

Kang said she could not just turn a blind eye to those in need, especially old people.

“I cannot just pass by the elderly who pull a rickshaw full of waste to earn money. I should help them every time I see them,” she said.

She said she would help old people as much as she could.

After the interview Kang playfully asked one of the elderly at the nursing home, “How much do you love me?”

“Very much so,” the old woman in her bed replied.